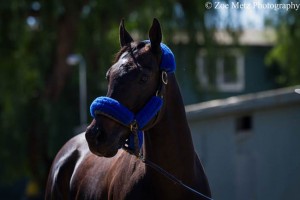 With the absence of California Chrome, who is pointing to the Dubai World Cup, the Santa Anita Handicap on Saturday, March 7, 2015 looks like a walkover for Shared Belief.
Photo: Zoe Metz

Race #8: 6,2,5,10,8,12
China Doll Stakes 3:30 PM PT
The China Doll Stakes is a wide open race and a beautiful race to attempt to hit with a longshot. Lutine Belle’s best race has been on the turf. She tried to run in the dirt last time out in the Las Virgenes (GI) but was no threat and finished a distant fifth to the winner, Callback. Now she returns to the grass, so a big improvement is expected. She’s a Big Winner showed a big heart in all her victories, and that is enough to take her into account. She recorded a nice workout after her last win which ensures another great performance. Word on the street says Curlin’s Fox is a freak, a superstar, but she’s moving up in class from a maiden race to stakes company, a tough challenge for any horse. However, she’s doing very well in the mornings and must be included for consideration. Jaded Glory always runs well, and she has hit the board in a Grade III race. With a bit of luck, she can upset this field at big odds. Bobbi Grace lost to She’s a Big Winner while playing as the heavy favorite. Both fillies were involved in an objection, but the stewards finally decided to make no changes to the order of finish. She should be one of the favorites again. Although Mio Me draws the far outside post, she ought to appreciate the stretch in distance to a mile.

Race #9: 1
San Carlos Stakes (GII) 4:03 PM PT
Chitu has not raced in more than two months, but he has been training very well towards to this race. He draws a tough inside post, but he’s speedy enough to take the lead and wire this field. Chitu is a consistent horse and has always has been among the top three finishers except in the Kentucky Derby at a distance he didn’t want to run. Seven furlongs is a perfect distance for him, and this time he will be very tough to beat.

Race #10: 8,11,3
Frank E. Milroe Stakes (GI) 4:38 PM PT
Summer Front has not raced since the Breeders’ Cup Mile when he finished a creditable fourth. He is a miler specialist with a solid record of 8-5-1-1. If he reproduces his BC Mile performance, he will be the horse to beat. Za Approval is improving with each race since coming under the watch of Mark Casse. He recorded a nice five furlongs in 1:00.1, and Mike Smith will retain the mount. The Argentinean-bred Winning Prize is returning from a long layoff, but he won this race last year with a very nice effort. This Argentinean loves the distance, and his trainer Neil Drysdale should have him ready for this race.

Race #11: 5
Santa Anita Handicap (GI) 5:17 PM PT
With the absence of California Chrome, who is pointing to the Dubai World Cup, this classic race looks like a walkover for Shared Belief. The rest of the field is weak, and they will fight for the second-place spot. The Chilean Bronzo has been crying for more ground lately, so he will appreciate the stretch out to 1-¼ miles. He is a very good choice for exotic purposes.