American Pharoah Establishes Empire in 2015 Kentucky Derby: Previously the winner in 1997, 1998 and 2002, trainer Bob Baffert won his fourth GI Kentucky Derby with Zayat Stable’s American Pharoah. American Pharoah takes the winner’s share of $2 million, along with the prestige and honor of winning America’s most famous horse race. The winner squeaked out his victory, which is understandable given Firing Line ran second. Despite the early morning scratch of International Star and El Kabeir yesterday, the Derby still had a fairly sizable 18 horses. With the win, American Pharoah improved his record to five wins and one loss. 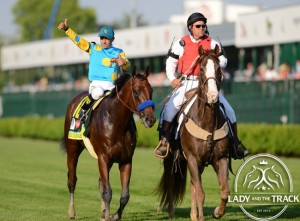 American Pharoah takes the winner’s share of $2 million, along with the prestige and honor of winning America’s most famous horse race after winning the 141st running of the Kentucky Derby on Saturday, May 2, 2015 at Churchill Downs. Photo: LymanDVM Photography

A son of Pioneerof The Nile, American Pharoah survived a fairly swift pace for 10 furlongs, at least in comparison to most 10 furlong races. Because of the large field, they generally run quicker and the horses tend to stagger coming for home. This year proved slightly different, with Dortmund and Firing Line fighting towards the end. But, they are quality horses too and that explains how they kept going.

When interviewed by NBC analyst Donna Barton after the race, jockey Victor Espinoza said, “I feel like the luckiest Mexican on earth.”

All three colts broke well and Dortmund took them through a first half in 23.24 seconds and second half in 47.24. Carpe Diem and Bolo were part of the leading group too, as well Danzig Moon.

Approaching the final turn and after six furlongs in 1:11.29, Dortmund began to lose his advantage, while Firing Line made his move and American Pharoah ranged up on the outside. Carpe Diem and Bolo faded. The rest of the field never made an impact.

As they began the stretch drive and hit the one mie point in 1:36.45, Dortmund tried to fight back, and so did Firing Line. Not tested in previous starts, suddenly jockey Victor Espinoza needed to whip American Pharoah in order to secure the lead. He never looked like a sure winner until the end. Firing Line fought on for second, while Dortmund held third.

American Pharoah earned a final time of 2:03.02, breaking the “Storm Cat” curse of no horse descending from Storm Cat winning in 44 previous tries. Ironically, the top three finishers in this year’s Derby descended from Storm Cat. Frosted, a non-Storm Cat colt, finished fourth and Danzig Moon stuck around for fifth. TimeformUS figure maker Craig Milkowski thinks the pace was “not crazy fast, but not slow or moderate.”

Espinoza admitted that he had trouble putting away Firing Line.

“The other horse, he was right there just next to me,” Espinoza told Barton. “I can’t just blow him away like I wanted to, but I got it done.”

Many other horses disappointed including UAE Derby winner Mubtaahij and the Florida Derby runners Materiality and Upstart. The top three finishers are conditioned by California-based trainers, although American Pharoah ran his prep races at Oaklawn Park. Baffert trains Dortmund too, making his collection of three-year-olds a powerful one. 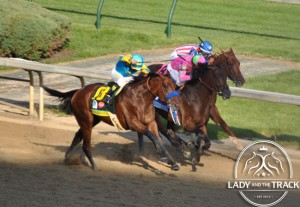 American Pharoah (outside) takes the lead from Firing Line (Middle) and Dortmund (inside) in the final furlong of the 141st running of the Kentucky Derby on May 2, 2015 at Churchill Downs. Photo: Casey Laughter

“I am so grateful to have these horses,” Baffert said on the NBC Sports telecast.

Horses that display speed in the Derby show a long history of running well in the Preakness in two weeks. Whether the trend changes this year remains to be seen, but American Pharoah certainly will become the heavy favorite in the next leg. Firing Line undoubtedly belongs competing with the best and would fit well in the Preakness too, if trainer Simon Callaghan and owner Arnold Zetcher decide to go on to the next leg.

Dortmund’s next move might be interesting to watch, as Baffert is in a position to win the Triple Crown with American Pharoah. If he enters Dortmund in the Preakness, that may jeapordize those Triple Crown chances. Dortmund is owned by Kaleem Shah, and trainers normally do the right thing and place their horses where they belong, regardless of whether a stablemate with a different owner shows up. Despite fading to third, he ran well.