Trainer Bob Baffert Quite Familiar with Triple Crown Trials: Bob Baffert knows a little bit about the trials of the Triple Crown. Three times he has been denied the chance at making history as a trainer of a Triple Crown champion, but he will have a fourth chance on June 6 thanks to American Pharoah. 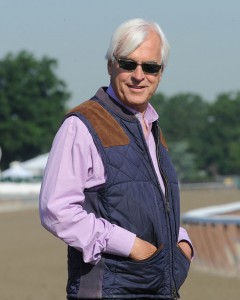 Three times trainer Bob Baffert has been denied the chance at making history as a trainer of a Triple Crown champion, but he will have a fourth chance on June 6 thanks to American Pharoah in the 147th running of the Belmont Stakes at Belmont Park. Photo: Coglianese/NYRA

Perhaps his most heartbreaking near-miss in the Triple Crown came from his first hopeful, Silver Charm. The gray colt went to the post of the 1997 Kentucky Derby as the favorite and did not disappoint, providing a rousing stretch run to take the classic by a head over a game Captain Bodgit. Silver Charm and Bob Baffert then traveled to Pimlico. Astonishingly enough, Silver Charm did not play as the favorite in the second leg of racing’s most brutal challenge, but regardless, he held on to win the Preakness by a head over Free House with the ever-game Captain Bodgit only a head behind him. By the time the Belmont Stakes rolled around, Silver Charm had collected fans and favoritism, and it was widely believed that the gray would become a Triple Crown winner. Fate had other plans, though, as the hopeful reign of Silver Charm fell with Touch Gold’s victory at the wire.

Undoubtedly stunned and plagued with feelings of disappointment after being so close to the Triple Crown, Baffert didn’t have to wait long at all for his second chance at the elusive triad. Real Quiet was gifted unto him in 1998, and the bay colt revived his trainer’s hopes after his half-length victory over Victory Gallop in the Derby. Although that rival was favored in the Preakness, Real Quiet managed another feat of superiority in winning the race by 2-1/4 lengths with Victory Gallop in second. Living up to its popular moniker as the “Test of Champions,” the Belmont provided Real Quiet with his greatest test and most poignant defeat. Victory Gallop proved that he was more than Real Quiet’s runner-up in stealing the Belmont away from him by a nose. Only four inches separated Baffert and Real Quiet from history in that attempt.

While it was longer than a year, it still didn’t take long for Baffert to campaign another Triple Crown hopeful. War Emblem, a dark bay colt, claimed the 2002 Kentucky Derby for Baffert with a surprising four-length victory. Garnering the favoritism for the Preakness, War Emblem cemented his run for the Triple Crown with a solid win over the Pimlico oval. Although War Emblem was expected to take the Belmont, his run for the Triple Crown fell far short with an eighth-place finish.

Bob Baffert’s longest drought of Triple Crown hopefuls has come to an end with American Pharoah’s victories in the Kentucky Derby and Preakness. The veteran trainer is understandably wary of getting too excited about his chances, but after three defeats, perhaps the fourth time will be the charm for Baffert.