American Pharoah Greeted by Julia Roberts in California: It wasn’t quite the reception Lindbergh received at Orly Field after conquering the Atlantic solo in 1927, but American Pharoah was treated like a Triple Crown winner should when he arrived at his Santa Anita home late Thursday morning before a throng of media and well-wishers that included Academy Award winning actress Julia Roberts. 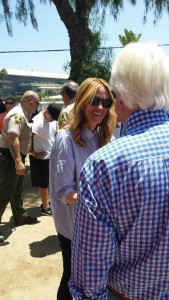 American Pharoah was treated like a Triple Crown winner should when he arrived at his Santa Anita home late Thursday morning before a throng of media and well-wishers that included Academy Award winning actress Julia Roberts, pictured above speaking to trainer Bob Baffert.
Photo: Santa Anita twitter (@santanitapark)

After a flight from Kentucky and a police escort from Ontario Airport to Hall of Fame trainer Bob Baffert’s Barn 5 at 11:40 a.m., the 3-year-old son of Pioneerof the Nile owned and bred by Ahmed Zayat settled in comfortably without so much as hiccup after much fanfare following a historic five-week run during which he became the first horse since Affirmed in 1978 to capture the Kentucky Derby, the Preakness and the Belmont Stakes.

“It’s great to have him back home,” said Baffert among a crush of media this morning at Barn 5. “Honestly, winning the Triple Crown is bigger than anything I could’ve imagined. I figured it would be kinda like winning the Kentucky Derby . . . That things would quiet down after a few days, but this is just getting bigger and bigger. We had helicopters following him from the airport and I thanked the guys with Arcadia P.D. It’s just tremendous and we’re so fortunate to have a great horse like this.”

The Triple Crown winner’s countless fans and well-wishers will have an opportunity to see him in the flesh when American Pharoah makes a public appearance at Santa Anita on Gold Cup Day, a week from Saturday, June 27.

“We want to thank American Pharoah’s owner, Ahmed Zayat, and his trainer, Bob Baffert, for being so incredibly generous in sharing this horse with fans from coast to coast,” said Santa Anita Chairman Keith Brackpool.

“We’re excited to present him to the public on June 27. It should be a tremendous day for those joining us on track and on television throughout the world.”

NBCSN will televise the Gold Cup live from 5 to 6 p.m. Pacific Time. 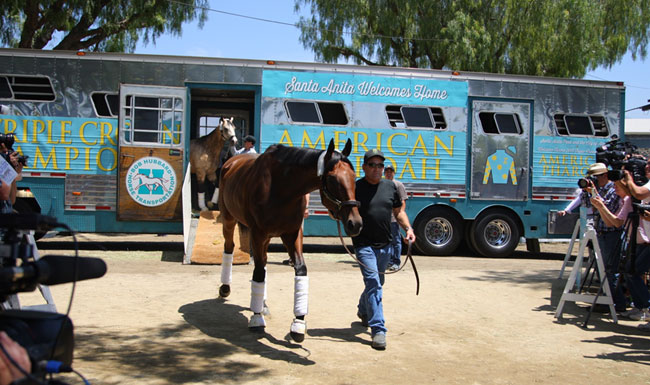 Telescope the Light of Hardwicke Stakes