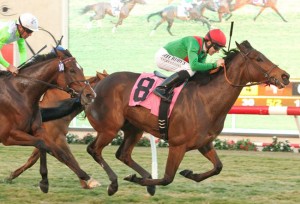 This race was known as the Beverly Hills Handicap until 2013 and was run at Hollywood Park. The race has been continually downgraded, leaving Grade I status in 1988 and Grade II status in 2003. Since 2010, the race seems to have finally landed recognition as a Grade III. First run in 1968, it’s been contested at a number of distances.

If you get a chance to head to Del Mar this weekend, it’s COLLEGE DAY! College students will get free racetrack admission with a valid student I.D. along with top-notch horse racing and track tips. Add to that D.J. battles, libations, football, jockey photo ops, Hippity Hop Derby match races, a best dressed contest, and a Reggae Fest free concert by Iration. The festivities kick off at 12:30 p.m. PST at the west end of the grandstand in the Cabana. So, come on down all you college folks for a beautiful day where the turf meets the surf.

We have a nice overflow field of eleven with one also-entered lined up for the 2015 Red Carpet Stakes, the 8th race of the day on a card of 9 with a start time of 4:00 p.m., PST.

Claiming the high weight of 122 pounds Elektrum looks to be the class of the field and is taking a drop in class for this race. However, I’m siding with a few elder fillies in this race. There doesn’t look to be many who will want to set the pace or take the lead here, so it will be interesting to see how this race plays out. I had a hard time trying to handicap this with all of the closers and plodders, so I went with my angle from last year. Let’s take a look.

Anyone who hit this race last year scored a hefty 29-1 price on the five-year-old mare Three Hearts, who won it for Team Valor International and trainer Neil Drysdale in the time of 2:15.54. She’s back to defend her title, and I like her in this spot. Last year she was one of my top three picks, along with Lady of Gold, who completed a massive exacta box that I didn’t play, unfortunately. I hope she rounds back into form in her second try off the bench. Drysdale ran her in this race last year fresh off the claim from Richard Mettee. The daughter of Hat Trick stayed on the SoCal circuit last year but could never garner another win. She was put on the shelf in July after finishing seventh against the boys at Arlington Park in the Grade III Stars and Stripes at 1½ miles.

Three Hearts was prepped for this race with a recent fourth in Del Mar’s Karthryn Crosby Stakes November 7. Joe Talamo rode her to her victory here last year and has the call again. I hope she can make an inside bid and not have to go wide in traffic. She runs just outside of her stablemate Energia Fribby, who drew the rail in post #2. Drysdale worked her seven furlongs on the turf in 1:28, which was his move last year, and I like it.

I’ll be chasing the same angle I did last year by going with a Graham Motion trainee again. I like the five-year-old mare Rusty Slipper to slip into one of the top three slots. She switches to a lower percentage jockey with Brazilian-born De Sousa Silvestre in the irons for his Del Mar debut. (He was the jockey who rode Arabian Queen to victory over Golden Horn at odds of 50-1 this summer in England). Rusty Slipper and Three Hearts have gone at it a few times with each prevailing, but the former should make some noise from post #11. The daughter of Lemon Drop Kid has flashed a little speed before and can track, so I’m sure she’ll be up close on the far outside. Two races back she won at Kentucky Downs in the One Dreamer Stakes, and last out she was beaten by only 1.35 lengths to finish fourth in the Grade III Althenia.

Call me crazy, but I’m digging the other daughter of Lemon Drop Kid in here, the six-year-old mare Customer Base from the Tom Proctor barn. Her last win was twelve races back in the Grade III Frankel, so she’s not exactly on a win streak. Mike Smith picks up the mount again, and he’s winning at 33% this meet. She has a runner-up finish at 1½ miles and a third-place finish at this distance of 1-3/8 miles. Can she win? It will certainly be very tough with this salty, well-matched group. Can she hit the board? Most definitely in my opinion. She comes in third off the layoff from post #8.

Trainer Christophe Clement sends in Trophee, who has the highest speed rating at this distance. Her speed figures seem to be improving as well as of late and at longer distances. At Saratoga three starts back in August, she won an allowance race by a head at 1-3/8 miles after bobbling at the break. Last out she was fourth at 1½ miles at Keeneland in the Grade III Dowager. She will be cutting back in distance from that race. If she can move up in class against this field, she stands a chance to definitely hit the board or win it. Her jockey James Graham only has a 3% win rate right now at Del Mar, which is the one knock I have against her. I’ll be using her defensively in a play as I think she’ll take a lot of money like Elektrum.

This looks to be a great race with a pretty evenly matched group of fillies and mares. I like the three older mares who have won a stakes race to hit the top three spots. For my play, I’m going to place a win/place bet on Three Hearts if she stays around 8-1 or higher. I’m also going to play an exacta box using 2, 5, 8, and 11 and a small $1 trifecta box with 2, 8, and 11 in hopes that a few of these girls with some decent odds will hit the board. Best of luck to everyone this weekend!