Shotgun Kowboy Heads to Churchill Downs for Clark Handicap: Shotgun Kowboy, the resilient winner of the Grade 3 Oklahoma Derby in September at Remington Park, had his final breeze at his home track this morning. The Oklahoma-bred will travel to Churchill Downs on Nov. 20 with a start in the Grade 1, $500,000 Clark Handicap the focus of his itinerary. 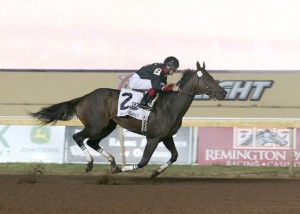 Shotgun Kowboy winning his most recent race, the Oklahoma Classics Cup at Remington Park on Oct. 16 with Cliff Berry up. The winner of this year’s Oklahoma Derby, Shotgun Kowboy will race next in the Grade 1, $500,000 Clark Handicap at Churchill Downs in Louisville, Ky. on Nov. 27. Photo: Dustin Orona Photography/Remington Park

Owned, trained and bred by C.R. Trout of Edmond, Okla., Shotgun Kowboy breezed a half-mile in :49.44 seconds under jockey Cliff Berry. Sunny and clear skies with cool temperatures greeted Shotgun Kowboy as he gave his handlers every indication that he is set for his next assignment.

“It was probably the best he’s been,” Trout noted. “Cliff (Berry) told me he was full of himself and he really had to hold on to him this morning. He’s so comfortable and doing everything so easy right now. He danced all the way back to the barn and was on his toes. Everything was in our favor and we’re excited.”

Trout plans to leave before dawn on Friday morning for the approximately 12-hour trip to Louisville, Ky. Once settled in beneath the twin spires, Shotgun Kowboy will school to the paddock and have a couple of gallops over the Churchill Downs surface to get familiar with the venue in his days leading to the race. The Clark Handicap, for 3-year-olds and older going 1-1/8 miles, is the marquee event in North American racing on Black Friday, Nov. 27.

Remington Park will feature the Clark Handicap via simulcast from Churchill Downs, during its live racing program on Nov. 27. Remington Park racing starts at 1:30pm that afternoon.

The 2015 Thoroughbred Season at Remington Park continues Wednesday thru Saturday, Nov. 18-21. The feature stakes race of the week is the $50,000 Silver Goblin Stakes for Oklahoma-breds going 6-1/2 furlongs on Friday. The first race nightly is 7pm-Central.

Memories of Winter and Patrick Valenzuela in Delta Downs Jackpot