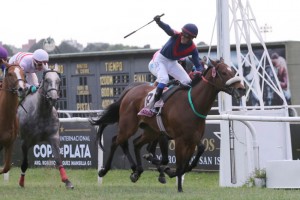 With much anxiety, people were awaiting the clash between the favorite Orcada Sale, the 2014 three-year-old champion Kalithea, and the unbeaten filly Sobradora Inc. The wait was worth it. As expected, the speedy Orcada Sale took the lead at the start and pulled away by several lengths in an attempt to win gate-to-wire. Feet First, the other filly of the race, sat in second place avoiding a fruitless fight in front while Kalithea was stalking the pace and Sobradora Inc was sailing patiently in the middle of the pack.

The field entered the stretch with Orcada Sale still in front by two lengths holding off Kalithea’s late run, and when it seemed like the mare would make it, Sobradora Inc appeared from the outside and made a lethal move to win the race by three quarters of a length. The gutsy Orcada Sale kept on for second place, La Terucca ran a great race to finish third, and Kalithea claimed fourth. With this win, Sobradora Inc ensures her filly of the year award and maybe even the best female of the year award.

Sobradora Inc, a daughter of Include and out of Stormy Soberly (ARG), by Bernstein, making her a ¾-sibling to the champ Sociologa Inc, clocked the 1¼ miles in an impressive 1:59.45 and is now unbeaten in four starts. The filly, owned by Stud Triunvirato, was ridden by Fabricio Barroso and is trained by Roberto Bullrich.

Sobradora Inc has a virtue, and it is that the filly always shows a heart of the champions and finds a way to win races, regardless of the margin of the victory. She has also demonstrated that she loves the route distance.

Sobradora Inc’s future is still uncertain, but the filly has the quality to run overseas since she is still young and has no limits yet. I hope to see her excel wherever she runs next year. 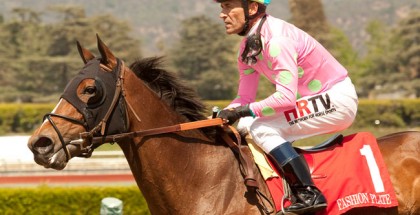