Flexibility Looks to Keep Improving on Kentucky Derby Trail: In horse racing, connections sometimes need to be flexible with their options for their runners, and that is exactly what happened with Jerome winner Flexibility. After chasing Mohaymen around the New York oval of Aqueduct, Flexibility was finally able to get a winning race under his girth since winning his debut three starts prior. 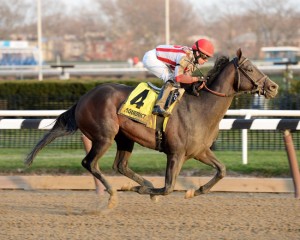 A two-time graded stakes runner-up last year to the talented Mohaymen, Klaravich Stables and William Lawrence’s Flexibility proved to be an easy victor in his rival’s absence, picking up his first graded stakes win in the Grade 3, $200,000 Jerome on Saturday at Aqueduct Racetrack.
Photo: Coglianese/NYRA

“It gives you a sigh of relief to not face him [Mohaymen] right now,” said Cherie DeVaux, assistant to trainer Chad Brown. “He can build his confidence and—I don’t want to knock anyone here—get a race that is easier for him.”

Flexibility has shown that he wants distance in the form of two-turn races, and the Kentucky Derby seems to be right up his alley. He has already traveled nine furlongs and in doing so finished fewer than two lengths behind Mohaymen, who has traveled to Florida to target those Kentucky Derby prep races. This leaves New York preps to Flexibility and his connections as he is clearly the dominant horse on that circuit right now.

Flexibility has successful connections in top trainer Chad Brown and top jockey Irad Ortiz Jr., and he also has the right breeding to keep him going competitively as the distances lengthen. His sire Bluegrass Cat was second in the 2006 Kentucky Derby behind Barbaro and in the Belmont Stakes behind Jazil. Bluegrass Cat did earn his own Grade I victory in the 2006 Haskell Invitational in which he defeated top horses Strong Contender and Flashy Bull. Bluegrass Cat also finished second behind Bernardini in the “Mid-Summer Derby,” the Grade I Travers Stakes. He was found to be lame on Sunday morning following the race, and it was discovered that he had fractured his pastern during his Travers run. He was retired to WinStar Farm before being moved to New York (2012-2014) and then to California (2015), where he is now thriving. In 2015, Bluegrass Cat was California’s leading sire of juveniles.

Flexibility is out Santa Vindi, who was a non-winner in four starts, but she is sired by top stallion Vindication. While he passed away at a very young age, as a racehorse, Vindication was undefeated in four starts as a juvenile. He ended his season with a win in the 2002 Grade I Breeders’ Cup Juvenile. Vindication’s trainer, Bob Baffert, was attempting to bring him back in his three-year-old year to cap off his racing career with a run in the Breeders’ Cup Classic. However, a suspensory injury in his left front arose in February, keeping him from being competitive. He retired to Hill ‘n’ Dale to begin his stud career in 2004. However, in 2008, the stallion had to be euthanized after it was discovered his gastric intestine had ruptured and could not be repaired.

Flexibility currently has 14 points on the Kentucky Derby leaderboard. The colt is bred to keep improving with distance and age and is likely to make one or two more starts before the Kentucky Derby, but nothing has been confirmed.

DeVaux said Brown will meet with the owners before determining the colt’s next start. “Hopefully, [in] each one he can continue to step up,” she said of the colt, who was bred by WinStar Farm. “He has been professional throughout.”

The Eclipse Awards: A Beginner’s Guide