The Eclipse Awards: A Beginner’s Guide

The Eclipse Awards: A Beginner’s Guide– Time to look forward to the Eclipse Awards! Every January, the Eclipse Awards honor horses and people involved within the racing industry. While equine stars receive the most attention, connections and media are also eligible to win their own specific categories. The awards even recognize the national handicapping champion. 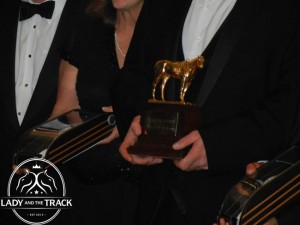 While equine stars receive the most attention at the Eclipse Awards, connections and media are also eligible to win their own specific categories. The awards even recognize the national handicapping champion. Photo: LATT

Newer racing fans may not understand how the process works. National Thoroughbred Racing Association (NTRA) provides a description on their website.

“Established in 1971, the Eclipse Awards are bestowed upon horses and individuals whose outstanding achievements in North America have earned them the title of Champion in their respective categories. Those awards are voted by NTRA, Daily Racing Form and the National Turf Writers and Broadcasters (NTWAB).”

“Eclipse Awards voters cast their ballots to rank the top three horses and individuals in each Championship division on a 10-5-1 point system basis. Eclipse Award winners are determined by first-place votes only.”

Dual-crown winner California Chrome took home the 2014 Horse of the Year and 3-year-old Male Eclipse Awards. Despite winning the Santa Anita Derby (GI), Kentucky Derby (GI) and Preakness (GI) to start off 2014, the outcome felt less certain after losses in the Pennsylvania Derby (GII) and Breeders’ Cup Classic (GI) to Bayern. To remove voters’ doubts, California Chrome captured the Hollywood Derby (GI) at Del Mar and sealed his fate as Horse of the Year.

This time, there will be no such drama. American Pharoah might win unanimously because of his achievement winning the Triple Crown, a feat not accomplished since 1978. He also won the Breeders’ Cup Classic (GI).

One Eclipse Award projected to end in a close vote is the one for Female Sprinter. No clear division leader emerged, although Cavorting, La Verdad and Wavell Avenue are possible finalist candidates.

In recent years, controversy existed over whether turf horses could win the Older Male and Female Eclipse Awards. Main Sequence, an older turf horse, took home the former category last year. Two years ago, turf legend Wise Dan won the same award. This trend made it difficult to recognize older dirt horses, but this year Older Dirt Male and Dirt Female Awards will be available. This eliminates confusion by giving the older dirt horses and turf horses their own separate categories.

Other than age, gender and surface-specific directions, no specific criteria is forced upon voters to choose their horses. The committee gives three finalists for each category before announcing the winner at the official ceremony. For example, when California Chrome won Horse of the Year, the two other finalists were Main Sequence and Bayern. But, surprisingly, the juvenile filly Take Charge Brandi received one Horse of the Year vote as well.

Final Eclipse Award winners are announced on Jan. 16. For those attending in person, the event runs from 6 p.m. to midnight at the Sport of Kings Theater, located at Gulfstream Park Racing and Casino. Wearing a black tie is optional.

Admission costs $400 per person or $4,000 for a table of 10. More information on purchasing tickets can be found at this link.

Other events are planned around the Eclipse Awards the same week, such as the National Thoroughbred Owner Conference from Jan. 11 to 13, regular Gulfstream Park racing from Jan. 13 to 18, Eclipse Awards Charity Poker Tournament on Jan. 14 and the ThoroFan Awards Breakfast on Jan. 15, and other activities. Read the entire list by clicking on the previous links.

Many legendary racehorses since the 1970s won Eclipse Awards. They recognize the special animals and humans that support our wonderful industry. For the next few weeks, discussing on social media the probable winners should be fun.