Santa Anita Park Saturday Picks & Plays January 9, 2015: After a long deserved rest we are back in with a handicapping piece! This week we focus on Santa Anita Park with the Sham Stakes GIII, a prep race on the Road to the Kentucky Derby, and the long awaited return of the champion California Chrome in the San Pasqual GII. Below you’ll find our late pick 4 selections and a few exotic plays. 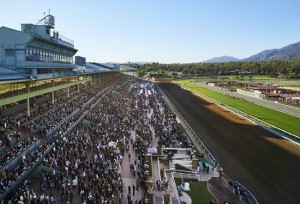 This week we focus on Santa Anita Park with the Sham Stakes GIII, a prep race on the Road to the Kentucky Derby, and the long awaited return of the champion California Chrome in the San Pasqual GII. Photo: Benoit

If you analyze Dressed in Hemes’ pedigree, you will probably infer he has a turf pedigree. In fact, his sire Hat Trick was a turf horse and his successful sons are turf horses. Additionally, Dressed in Hermes has some Australian and Irish blood on the dam side, which indicates the horse would have more ability on the turf. Although all of his wins have been on the turf, Dressed In Hermes prevailed on the dirt, finishing in a respectable fourth place, in a race won by the Derby contender Exxagerator. It looks like Dressed in Hermes can handle the dirt since his race was nice for a first time starter. The field he’s facing is not all that strong so he has a great chance to win and participate in the Derby Trail bandwagon.

Motown Men is definitely the class of the field, so much so that he only needs to duplicate his last effort to win the race. However, his trainer Ted West has a low winning percentage with horses coming off a layoff. Just Kidding failed as the favorite in his last race, beaten by Cyrus Alexander, a horse who is still a promise. Just Kidding switches to the lead rider Rafael Bejarano and according to his workouts he looks fit in the mornings. If you draw a line to Ground Rules’ last race, he looks like a serious horse. Mike Smith is in the saddle which is always a good sign.

The champion California Chrome is returning after a nine month layoff. The horse suffered the trip to Dubai and looked a bit thin after running the Dubai World Cup. He also suffered injury when prepping to run in Ascot, definitely a year to forget. Fortunately, California Chrome experienced a full recovery and now looks stronger and fit. Some people considered his last workout a bit fast but he was visually impressive, doing everything so easy. For those concerned about the long layoff, the only horse who can beat him is Hoppertunity, and only if California Chrome has an awful day.

Any horse can win in a weak field. If you’re making a big play just push the “All” button. In my case I’m just going to use three horses. Condiment can take advantage of a fast pace, pass tired horses, and win the race. Justonemorething always runs well and is dropping in class for this race. The trainer has a great winning percentage with claimers, so this horse is a must use. Razorbill is a versatile horse who can take the lead or stalk the pace. He romped in an $8,000 claiming race on December 10, 2015 at Los Alamitos and keeps working very well.

California Chrome a ‘Must-use’ in San Pasqual at Santa Anita