Replacing A Legend: The Next Santa Anita Track Announcer

Replacing A Legend: The Next Santa Anita Track Announcer by Kirby C. Grimes– The racing world was shocked last December when it was announced that the legendary Trevor Denman was to retire from Santa Anita, effective immediately. For 32 years the South African native had wowed fans with his unique and flavorful race calls, and his entrance into American racing had opened the door for international announcers to come to the United States. 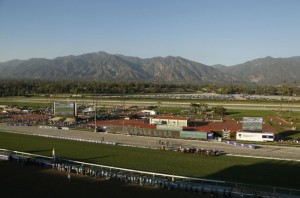 Regardless of whoever lands the position as race caller at Santa Anita Park, the next six months will be exciting as the eventual winner earns his new job in the highest profile public forum possible. Photo: Benoit

Once the paralyzing shock of the news wore off, a lonely racing world turned its attention to who could possibly fill the void. That same day it was announced that Michael Wrona, the announcer at Golden Gate Fields, and Frank Mirahmadi would fill in on a rotating basis for the balance of the Winter/Spring meet until a replacement could be found. Mirahmadi is the announcer at Monmouth Park and the boutique Thoroughbred meets at Los Alamitos. Formerly the announcer at Oaklawn Park, he resigned that position to pursue his dream job at Santa Anita. Santa Anita announced that a worldwide search would commence to find a replacement.

Most racing fans feel that it is between Wrona and Mirahmadi for the position, with Mihramadi being the popular pick for the job. However, applications have come in from across the world, and there is the distinct possibility that the track will stick with an international announcer to replace Denman. Though no announcement has been made as to whom the applicants are, several have become known, and their careers and prospects for the position are detailed as such.

A native of Southern California, Frank Mirahmadi began going to the sun-drenched ovals of California in the early 1970s with his father. He instantly fell in love with racing and with the announcers. He was blessed with the ability of a flexible voice, one that would allow him to imitate almost anyone. He began doing mock race calls in the voice of established race callers and making tapes of those calls. In 1992, on a whim, he sent one of those tapes to Hollywood Park, and much to his delight, he was given the chance to call two races in December of that year on closing day of the autumn meet. One of the two calls he did in the voice of his idol Trevor Denman, the man he now hopes to replace.

He has since called races from California to New Jersey and almost everywhere in between. He began his career at the historic Hialeah Park during its days as a Thoroughbred venue and has also been the announcer at various Northern California fairs, Louisiana Downs, and Turf Paradise. Known for his smooth and colorful race calls as well as his imitations of other announcers, he spent several years as a racing analyst at TVG.

Mirahmadi is fan favorite among younger and more casual fans and is quite active on social media. His popularity is linked to his announcing style and imitations done during his race calls as well as due to his time on-air at TVG. He idolizes Trevor Denman and is known to be well-connected with Santa Anita’s management. In fact, he resigned his position at Oaklawn Park to pursue the booth at Santa Anita. The distinct disadvantage he has is his lack of an international accent and a unique flavor to his calls. It is highly probable the track will want to stick with an announcer in the vein of Denman, and if so, Mirahmadi would be behind the proverbial eight ball.

Michael Wrona, track announcer at Golden Gate Fields, is another candidate with a very strong chance of landing the booth. A native of Brisbane, Australia, he arrived in the United States in 1990 to assume the race calling position at the now defunct Hollywood Park. His very arrival in the United States is owed to Denman’s popularity at the time.

After only one season at Hollywood Park, he was caught up in a board room battle and was late through no fault of his own. On the verge of returning to his homeland heartbroken, he was offered the announcer’s position at Bay Meadows in Northern California, followed shortly with an appointment to the same position at Golden Gate Fields. Once again he was a victim of circumstance and began a decade-long journey across America. The next tens years saw him become the announcer at Retama Park in Texas, Arlington Park in Chicago, The Fairgrounds in New Orleans, Lone Star Park outside Dallas, and a second stint at Hollywood Park. Several times the door was slammed shut due to situations beyond his control. Yet, he continued to persevere, and with the spirit of the ANZACS of Gallipoli and Tobruk coursing through his veins, he soldiered on. In 2005, he returned to Golden Gate Fields which by then was the only major racetrack in Northern California.

Wrona brings thirty years experience in racing calling and a unique style reminiscent of his race calling mentor, Johnny Tapp. He prides himself on being accurate and delivering an authentic commentary on each race. As an Australian, his accent and style of calling would ensure a smooth transition from Trevor Denman’s style of announcing.

A dark horse candidate, and one that inside sources say is receiving strong consideration, is Alistair Cohen of South Africa. A native of Durban, he is an announcer and presenter for Tellytrack, the South African equivalent of TVG. Only 25 years old, Cohen possesses remarkable race calling abilities, and his age would ensure a long tenure at Santa Anita.

Born less than half a mile from Greyville Racecourse, the premier track in South Africa, Cohen grew up going to the track. His father, an avid bettor, would take him to the races in a stroller. He quickly became interested in racing and especially race calling, and around the age of five he began making mock race calls.

At the age of twelve he entered a race-calling competition at Clairwood Racecourse. The organizers of the competition couldn’t believe his age! For the next seven years he honed his skills, and, soon after landing a job with Phumela, the country’s racing authority, in 2010, he began regularly calling races.

Cohen has always revered Denman and dreams of following in his footsteps. He doesn’t plan out his race calls; he simply allows the horses on the track to lead him in his calls. He feels that should he be given the job at Santa Anita, fans would enjoy his race calls, and it would seem as if Denman had never left. His chances, by virtue of reading the tea leaves, appear to be very good at securing the position.

There are perhaps thirty or more applicants from across the world, and few of the names that have applied are known publicly. From Australia to South Africa, Britain, and the United States, the track will have their pick of the cream of the crop. As the situation stands now, Wrona appears to be a head in front of Cohen with Mirahmadi a trailing third. With several months to go in the process, as applicants are given auditions, the field will become more clear. Regardless of whoever lands the position, the next six months will be exciting as the eventual winner earns his new job in the highest profile public forum possible.