Keen Ice Seeks Respect in Donn at Gulfstream Park: Void of lofty expectations, Donegal Racing’s Keen Ice kicked off 2015 by running fifth in the Holy Bull Stakes (GII) at Gulfstream Park, after coming in third in the Remsen (GII) at Aqueduct and fifth in the Breeders’ Futurity (GI) at Keeneland. Now in 2016, he returns to Gulfstream in the $500,000 Donn Handicap (GI), scheduled for Saturday. 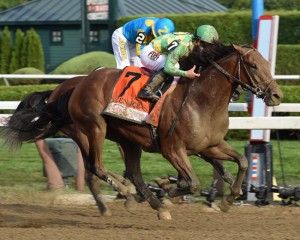 Donegal Racing’s Keen Ice kicked off 2015 by running fifth in the Holy Bull Stakes (GII) at Gulfstream Park, after coming in third in the Remsen (GII) at Aqueduct and fifth in the Breeders’ Futurity (GI) at Keeneland. Now in 2016, he returns to Gulfstream in the $500,000 Donn Handicap (GI), scheduled for Saturday. Photo: Coglianese/NYRA

Fans might expect more this time. After all, Keen Ice handed Triple Crown champion American Pharoah his only defeat of an otherwise magical season last year. Before the Travers (GI) victory, Keen Ice also ran a closing second to American Pharoah in the Haskell (GI) at Monmouth Park. Yet, he finished fifth at Gulfstream one year ago.

“He’s gotten better and better … he’s coming into it in such good shape,” Romans said in a press release. “He’s going to run a big race.”

Other handicappers might feel skeptical after Keen Ice finished fourth in the Breeders’ Cup Classic (GI) against American Pharoah, and fourth again in the Clark (GI) at Churchill Downs. Just toss the Classic race. American Pharoah ran one of the best races of his career and completely dominated the field.

As for the Clark, the effort is less forgivable because the pace setup completely favored Keen Ice’s running style. Also, besides Breeders’ Cup Classic runner-up Effinex, the field lacked depth for a Grade I event. But, Keen Ice closed late and only lost by roughly a length. Perhaps his rider Corey Lanerie needed to move sooner.

No one should feel too disappointed if Keen Ice requires one race to get in the flow of the season. With that said, he remains a legitimate win contender by class alone. The expectations are higher though. Racing fans are quick to call his Travers win a fluke because they wanted American Pharoah to remain invincible, which is unrealistic.

To win the Donn, Keen Ice must defeat the Todd Pletcher trio of Mshawish, Itsaknockout and Madefromlucky. Whichever one handicappers choose will cost them a premium of using a Pletcher-trained horse.

The most promising horse of Pletcher’s trio, Mshawish, owns a recent graded stakes victory in the Hal’s Hope (GIII) on the same racetrack. If he turns in another strong performance, the Dubai World Cup (GI) could be in his future. Also, Fountain of Youth (GII) winner Itsaknockout comes into this race on an upswing after winning an optional claimer off a long layoff. He can win, while Madefromlucky seems more questionable.

Financial Modeling competes in this race too, and the Chad Brown-trained 5-year-old horse won the Queen’s County at Aqueduct Racetrack over notables names such as Tommy Macho and Kid Cruz.

Last on the contenders’ list, but not least, Team Valor International’s Mexikoma just won the Sunshine Millions Classic at the same distance. A couple of handicappers did not believe Mexikoma could win at Gulfstream, a racetrack stereotyped into favoring speed more heavily than other racetracks, but his win erased any doubts.

Bettors skeptical of Keen Ice winning at Gulfstream Park might feel better “backwheeling” the Curlin colt underneath a few contenders. The three horses most likely to win besides Keen Ice are Mshawish, Itsaknockout and Mexikoma. Regardless of the outcome, keep an eye on Keen Ice going forward.

Uncle Lino Can Upset Mor Spirit in Robert B. Lewis