Cathryn Sophia, a product of Street Boss and Sheave, a daughter of Mineshaft, claims her own perfect record in three starts, albeit wins that came over less than star-studded fields. What she has lacked in competition, though, Cathryn Sophia has made up for in style.

In her maiden as a juvenile last October, Cathryn Sophia rocketed out of the Parx starting gate and took the six-furlong event by an easy 12-3/4 lengths for trainer John Servis and owner Cash is King LLC, the same group of owners that campaigned Afleet Alex.

The Maryland-bred filly stepped up in class for her next start, the December Gin Talking Stakes at Laurel Park. Easily transitioning to racing at a new distance of seven furlongs, Cathryn Sophia trounced the field from her front-running position, winning by a lengthening 16-1/4 lengths. This win should be viewed as especially impressive considering she mistakenly ran on her left lead down the homestretch yet still won so easily. While Cathryn Sophia does seem to fall short in that age-old argument of the quality of the field she beat, it is important enough to note that fifth-place finisher Look Who’s Talking went on to take the Maryland Juvenile Filly Championship Stakes.

In her graded stakes debut in the Forward Gal Stakes (GII) at Gulfstream, Cathryn Sophia was forced to run a bit differently than had been her typical style. Breaking from the inside post, Cathryn Sophia moved away from the gate a bit more slowly than usual and was kept back from the leaders. However, the change in running style seemed to suit her just fine as she maneuvered away from the rail and around the leaders to win by 5-1/2 lengths in spite of again switching to the wrong lead nearing the wire. In case you’re wondering, that most recent open-length victory brings her winning margin tally to a whopping 34-1/2 lengths.

Considering her habit of running on her left lead down the stretch and breaking slowly, it seems that Cathryn Sophia’s biggest challenger so far has been herself. Otherwise, she has been able to expertly overcome typical traffic problems and pull away with style. However, the filly’s stamina can easily be called into question when considering her to be a prospect for the 1-1/8-mile Kentucky Oaks (GI) and other sophomore filly classics.

With Street Boss as her sire, Cathryn Sophia’s speedy success thus far at distances shorter than a mile makes sense – Street Boss progeny’s maximum winning distance levels out at about seven furlongs. Although he has thrown a handful of runners that could manage the more classic distances, like Danza and Metaboss, it’s hard to see Street Boss as any more than a major sprint-focused sire. The available stamina on Cathryn Sophia’s bottom half seems to be quite lacking as well. Her dam, Sheave, was unraced and has only one other foal, a yet to race two-year-old Bullsbay filly. Sheave’s dam Belterra (Unbridled) provides perhaps the most immediate source of stamina seeing as she won at 1-1/16 miles, although the resulting products of her matings to A.P. Indy sons Mineshaft, Bernardini, and Pulpit don’t instill much confidence in her ability to breed stamina on that cross with Mineshaft that produced Cathryn Sophia. Belterra’s daughter by Bernardini claimed her only win at 1-1/8-miles on the turf, whereas her daughter by Pulpit began her career running routes but had more success, though never a win, at sprint distances. Belterra’s offspring tend to have the affinity for turf over dirt as well. Cruising Haven, Belterra’s dam, was also unraced but provides even more speed to Cathryn Sophia’s bottom side seeing as she produced sprinters as well, including multiple graded sprint stakes winner Royal Haven. Cathryn Sophia is also lent more speed in her distant pedigree by her triple dose of Mr. Prospector, double dose of champion sprinter and stallion Intentionally, and double dose of the good broodmare Apidistra, mother to the blazingly fast miler and great handicap horse Dr. Fager and champion sprinter Ta Wee. Cathryn Sophia’s breeding certainly points to the likelihood that she’ll be better suited to shorter distances, but perhaps she’ll outrun her pedigree like she’s so effortlessly outrun all of her opponents so far.

Cathryn Sophia will be facing her litmus test in the Davona Dale Stakes (GII) should she run. In addition to the stretch out to a mile, there has been buzz that the likes of Rachel’s Valentina, Carina Mia, and Lewis Bay, each promising fillies in their own rights, are taking aim at the Davona Dale. Cathryn Sophia has dominated lesser fields and races, so a start in the Davona Dale against other good fillies should help determine her authenticity as both a quality three-year-old filly and a Kentucky Oaks contender. 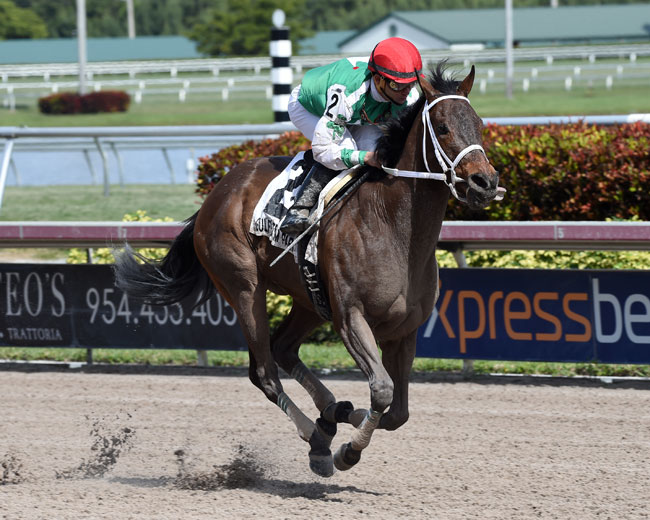 In her graded stakes debut in the Forward Gal Stakes (GII) at Gulfstream, Cathryn Sophia was forced to run a bit differently than had been her typical style. Photo: Bob Coglianese

Rent the Races —Saving Horse Racing One Hat at a Time