Kentucky Derby Top 10: Casey’s Picks– The Fountain of Youth just showed how much better Mohaymen was than these “hype” horses like Awesome Banner. Zulu ran a bang-up race and is thus out of the “stable” and back into my Top 10. He ran great and is aiming at running back in the Florida Derby against horses such as Mohaymen and Nyquist. Here is the updated Top 10 form yours truly!

Mohaymen (Tapit – Justwhistledixie, by Dixie Union) Mohaymen showed everyone that he is a top-notch contender for the roses, and he did so just as easily as ever. Zulu tried to go with him into the stretch at Gulfstream, but the grey colt was not having it. He won the race easily and was eased to a 2¼ length win over the Pletcher horse. He is headed to the Florida Derby and the Kentucky Derby as the likely favorite.

Nyquist (Uncle Mo – Seeking Gabrielle, by Forestry) Nyquist has moved up into second for the following reasons. One, his San Vicente was top-notch. He completed the race easily over a good horse in Exaggerator. Two, Mor Spirit was recently pulled up by Gary Stevens in a work, but the horse was vetted and all checked out okay. Baffert said the colt pulled himself up, apparently not wanting to work. For now, Nyquist remains undefeated and is now a second-place horse in my book.

Mor Spirit (Eskendereya – I’m a Dixie Girl, by Dixie Union) Mor Spirit was recently pulled up from a work. According to trainer Bob Baffert, he simply pulled himself up as he did not want to work, but I am not convinced. The horse has never been insanely impressive in the mornings, but not wanting to work concerns me, especially since he is among those to potentially start in the San Felipe. He moves down a spot for now.

Gun Runner (Candy Ride – Quiet Giant, by Giant’s Causeway) There is no shortage of pedigree in this colt’s blood. He is sired by a top stallion and is out a half-sister to the ill-fated Saint Liam. Gun Runner was a horse to watch last fall, and finally having him on my list feels like such an accomplishment. I picked this colt out in his second start at Keeneland and have been waiting for him to break through since then. He is headed to the Rebel Stakes in March. He should be facing another tough race, but it could work in his favor!

Exaggerator (Curlin – Dawn Raid, by Vindication) Speculation has been made that this colt won’t get the distance he needs for the Kentucky Derby, but he is sired by a Preakness winner and a second-place finisher in the Belmont, and his dam is sired by a son of a Triple Crown winner. Exaggerator has no shortage of back class in his bloodlines. He is headed to the San Felipe and most likely the Santa Anita Derby before heading to Louisville.

Smokey Image (Southern Image – Special Smoke, by Free House) Smokey Image has heads turning his way as he is getting attention from his impressive Cal Cup Derby score. His next test comes in the San Felipe, where he puts his perfect 6-for-6 record on the line in open company for the first time. Some are talking him up as the 2016 version of California Chrome. Could he be that good, or better?

Brody’s Cause (Giant’s Causeway – Sweet Breanna, by Sahm) He has seven works under his belt since January 18, and we are still a bit less than a month away from seeing his three-year-old debut. He is coming onto the Road to the Kentucky Derby in the Tampa Bay Derby before heading north to the Lexington oval, Keeneland. There, he will hopefully hit the Blue Grass Stakes before the Kentucky Derby. Romans has a racehorse on his hands, but I hope he has a Derby horse as well.

Suddenbreakingnews (Mineshaft – Uchitel, by Afleet Alex) This gelding burst onto the Kentucky Derby contenders list when he stormed home in the Southwest Stakes at Oaklawn. He is bred for the Belmont, let alone the Kentucky Derby. His running style is pace dependent, so it worries me some headed into Louisville as the fast, sprinter types no longer make the Derby thanks to the points system. However, if he is good enough, he will get there. I like his chances.

Whitmore (Pleasantly Perfect – Melody’s Spirit, by Scat Daddy) Whitmore looked so good last out in the Southwest Stakes, only to be caught by Suddenbreakingnews in the final sixteenth. He is bred to do just fine at 9-10 furlongs. His sire won the 2003 Breeders’ Cup Classic and finished third the following year. Whitmore should have no problem. Even Scat Daddy won the nine-furlong Florida Derby before sustaining a career-ending injury in the 2007 Kentucky Derby. Whitmore is scheduled to start next in the Rebel Stakes.

Zulu (Bernardini – Temporada, by Summer Squall) Zulu put up a good fight in the Fountain of Youth but, understandably, could not keep up with Mohaymen. Zulu will start next in the Florida Derby, per Todd Pletcher. Zulu is 3-2-1-0 in his lifetime. He has a lot of time to improve and mature. His pedigree says he should be a superb three- and four-year-old. Look out for this one, whether it be in Hallendale Beach, Louisville, or the future.

Mo Tom (Uncle Mo – Caroni, by Rubiano) He had to check sharply in the stretch of the Risen Star Stakes but still came flying to finish third behind Gun Runner and Forevermo. Many say he could have easily won the Risen Star without being cut off and checked. I still don’t believe he can handle the Kentucky Derby distance, but he is likely to show up in the Louisiana Derby.

Destin (Giant’s Causeway – Dream of Summer, by Siberian Summer) This full brother to Creative Cause won the Sam F. Davis at Tampa Bay Downs in preparation for the Tampa Bay Derby. He looks like one who is beginning to improve, which is exactly the right time. He looks poised to win big again and head to Louisville following the Tampa Bay Derby. Even without a win, if he can finish on the board, he likely heads to Louisville.

Greenpointcrusader (Bernardini – Ava Knowsthecode, by Cryptoclereance) This full brother to Algorithms has a good record behind him. Providing one tosses out a bad trip in the Breeders’ Cup Juvenile, he has never finished worse than second. His next start will be his last before the Kentucky Derby. He is headed to the Louisiana Derby at Fair Grounds. I am not sure if they are trying to send him to a track that favors his running style a bit more or if they are ducking a strong cast in the Florida Derby. Either way, I don’t like this plan, and I don’t think this horse is as good as some may think. 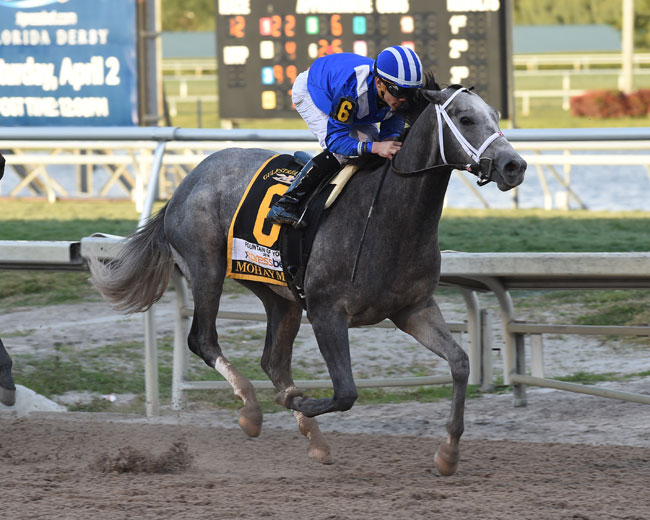 Mohaymen showed everyone that he is a top-notch contender for the roses, and he did so just as easily as ever. Zulu tried to go with him into the stretch at Gulfstream, but the grey colt was not having it. Photo: Coglianese

Stallion In Summation Quietly Doing a Great Job in Florida 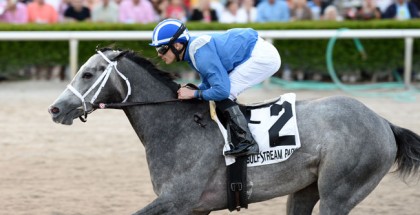