Updates on Kentucky Derby 2016 Contenders: Less than two weeks remain until the Kentucky Derby, scheduled for May 7 at Churchill Downs. The majority of contenders are currently in Louisville, training for the most important race of their lives. Handicappers will want study videos, as workout times do not reveal important clues such as how the horse moved over the track.

Out of the reports available, Lani’s preparation sticks out among them for the wrong reasons. He needs to turn the corner soon if bettors are to believe he can become the first UAE Derby champion to win the Derby.

Also, Fellowship and Adventist hold a small shot to get in, if any defections happen soon. 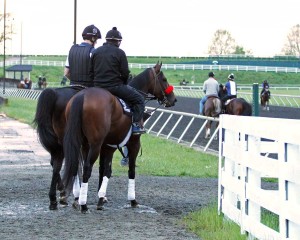 Last Saturday, the undefeated colt Nyquist worked five furlongs in 1:01.80 at Keeneland for trainer Doug O’Neill and Reddam Racing. He will work again on Friday at 12:15 p.m.
Photo: Coady Photography

2. Nyquist (130): Last Saturday, the undefeated colt worked five furlongs in 1:01.80 at Keeneland for trainer Doug O’Neill and Reddam Racing. He will work again on Friday at 12:15 p.m.

3. Exaggerator (126): Also last Saturday, the son of Curlin worked five furlongs in 1:00 flat at Santa Anita Park for trainer Keith Desormeaux. According to reports, he was scheduled to fly into Louisville yesterday.

4. Outwork (120): The Todd Pletcher-trained son of Uncle Mo (owned by Mike Repole) breezed four furlongs in 48.87 seconds last Friday at Belmont Park. He reportedly rated behind horses and passed them.

5. Brody’s Cause (114): As with the other top horses, he worked last Saturday too at the distance of five furlongs. Churchill Downs clockers timed him in 1:01.80.

6. Creator (110): Five furlongs seems to be a recurring theme. Gun Runner’s stablemate breezed in 1:02.40 at Churchill Downs two days ago for Amussen and WinStar Farm.

7. Lani (100): The sluggish time of 1:06 for five furlongs at Churchill Downs last week may scare supporters, as well as the weird three-furlong move this morning, but according to owner Yoko Maeda’s agent (on Blood-Horse), “everything is what I have planned.” In addition, Yutaka Take said, “if he wants to run … we have a big chance.”

8. Mor Spirit (84): The Pennsylvania-bred is present at Churchill Downs for trainer Bob Baffert. He breezed five furlongs in 59.80 yesterday.

9. Mohaymen (80): His “best out of 47” four-furlong bullet last Wednesday at Churchill Downs stirred up conversation. Trainer Kiaran McLaughlin possibly saved the “real” Mohaymen for May 7.

10. Danzing Candy (60): In an unorthodox move, trainer Clifford Sise decided to prepare him at San Luis Rey Training Center in California rather than ship to Kentucky early. He worked in 1:12 flat last Saturday.

11. Destin (51): Unlike the others, he worked at Palm Beach Downs last Saturday, breezing five furlongs in 1:00.32. He arrived at Churchill Downs yesterday.

14. Shagaf (50): The Chad Brown-trained son of Bernardini breezed four furlongs in 48.40 seconds by himself at Churchill Downs three days ago. According to Brown (on TDN), “He’s like a big locomotive going downhill.”