Updates on Kentucky Oaks 2016 Contenders: Only one week remains until the premier race for 3-year-old dirt fillies in North America, the Kentucky Oaks at Churchill Downs on May 6. Without the presence of Songbird, the race will offer bettors a variety of viable choices.

Give the pace scenario some careful thought. Without reading the past performances, none of these horses seem to be “need-the-lead” types, although a few of them can lead if necessary.

The weather report looks great for Friday afternoon, with a high of 74 degrees and not a cloud in the sky. 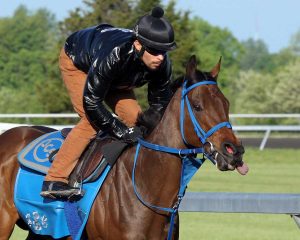 3. Land Over Sea (128): Also last Saturday, the Fair Grounds Oaks winner breezed five furlongs again in 1:02.20 at Keeneland. Plenty of fans are hoping for a Doug O’Neill Oaks/Derby Double with her and Nyquist.

6. Cathryn Sophia (80): The third-place Ashland finisher breezed five furlongs in 59.60 seconds at Keeneland last Saturday for trainer John Servis and Cash is King. She looks headed towards the Oaks.

8. Venus Valentine (50): Two days ago, she worked four furlongs in 49.40 seconds at Churchill for Mo Tom’s conditioner Tom Amoss and Rosemont Farm. Blinkers will be added for the Oaks.

9. Mokat (50): Three days ago, she “worked” (rather then breezed) six furlongs in 1:13.80 at Santa Anita Park. For unexplainable reasons, horses are rarely given the “breezing” designation on the west coast.

10. Rachel’s Valentina (48): Yesterday, she breezed four furlongs in 47.80 seconds at Churchill. Bettors and fans expect her to be a popular choice as the daughter of Rachel Alexandra.

11. Royal Obsession (45): The filly who sold for over $1 million twice breezed five furlongs in 1:00 flat at Churchill four days ago for Asmussen and Stonestreet.

12. Dream Dance (44): No workouts show for this Neil Howard-trained filly since April 10. She did gallop last Saturday at Churchill though.

13. Nickname (40): Asmussen comes into the Oaks loaded with another contender. Four days ago, she breezed five furlongs in 1:00 flat at Churchill.

14. Taxable (40): Also for Asmussen, she breezed five furlongs in 1:02.80 at Churchill four days ago. The Winchell Thoroughbreds-owned filly only lost by a neck to Terra Promessa in the Fantasy.