Belmont Stakes: The People’s Choice by Casey Laughter– The Belmont Stakes marks the end of an exciting Triple Crown series, no matter if there is a Triple Crown on the line or not. For the first time since 2013, there will not be a Triple Crown on the line this year. Kentucky Derby winner, Nyquist, was ruled out by an elevated white blood cell count while Exaggerator comes in at the Preakness victor. This renewal of the Belmont promises to be a scintillating one, however. 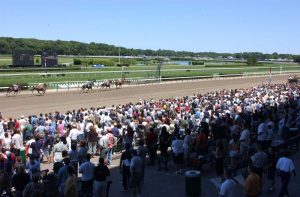 This year does not promise a battle of the sexes or a Triple Crown possibility, but the Belmont Stakes could potentially be spectacular in its own right. Photo: Coglianese, NYRA

Combing through history and setting up a voting poll, I have created five categories. There is the historical, the fan favorite, the exhilarating, the long awaited, and the longshot. Looking back, some of the best Belmont Stakes renewals did not make the list, but there will be honorable mentions. Here we go!

The Historical: 1973 was the year that not only ended a 25-year Triple Crown drought, but also opened the door to what was likely to be considered “the Golden Age” of racing. Secretariat won the Belmont Stakes by an astonishing 31 lengths, which is nearly a sixteenth of a mile! How amazing is that? Secretariat went on to sire some amazing horses, including Lady’s Secret, Risen Star, and Tinner’s Way.
Honorable Mentions: All past Triple Crown winners

The Fan Favorite: 2007 was likely one of the most amazing stretch runs in the history of horse racing! A battle of the sexes, as Tom Durkin called it! Rags to Riches was the first filly in 102 years to win the Belmont Stakes. While her and Curlin battled down the long homestretch, I was one of thousands of people screaming for the filly to get home first.
Honorable Mentions: Afleet Alex, American Pharoah

The Exhilarating: While not quite as scary at the Preakness Stakes, 2005 was certainly a Belmont Stakes to remember. Afleet Alex had not won the Kentucky Derby but he did win the final two legs of the Triple Crown. The Belmont Stakes just showed how dominant he was over his crop. What could have been had he not been injured afterward? We will never know.
Honorable Mentions: Rags to Riches, Secretariat, American Pharoah

The Longshot: 1999 was the second time in two years that Bob Baffert had a shot at the Triple Crown. When his charge, War Emblem, stumbled at the start, that opened the field up for an upset. What happened though, was a miracle. Sarava took the on Medaglia d’Oro and the two battled, until, in the end, Sarava pulled just a half length in front of Medaglia d’Oro to spring a 70-1 upset!
Honorable Mention: Ruler on Ice, Summer Bird, Da Tara

The Long Awaited: 2015 was a year that could not ever be topped. What American Pharoah did for the racing world was revive it, in a sense. A colt that was seemingly extraordinary ended the longest Triple Crown drought. We all had been waiting for American Pharoah, which truly makes his Belmont Stakes so special.

This year does not promise a battle of the sexes or a Triple Crown possibility, but the Belmont Stakes could potentially be spectacular in its own right. We could see a new three-year-old colt emerge as a potential star for the remainder of the year. Could Exaggerator flash some talent once again and win the Test of the Champion, potentially making him a leading candidate for the year-end honors of Champion Three-Year-Old Male? While we sit and wait for those Belmont gates to fly open, think about who your favorite Belmont Stakes winner is.

Beholder Aims to Take On Boys in Breeders’ Cup Classic