Home » Horses We Love » Karla and Megan: An OTTB Story
No Comments

Karla and Megan: An OTTB Story by Casey Laughter– Monster, an adjective used to describe a mare named Megan’s Rainbow. The mare was listed on Craigslist in 2009, at age nine, for a rock bottom price of $120 from a so-called rescue. Under the mare’s photo listed some of her qualities, such as docile and sweet after being off the track for about a year. Without much more information, Karla Smith, aged 14, and her parents decided the mare would be a good match for her. 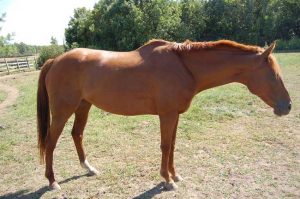 Without much information, Karla Smith, aged 14, and her parents decided that Megan would be a good match for her. Photo: Karla Smith

Valentine’s Day is seemingly a fitting day to receive what could be your new best friend. Megan’s Rainbow arrived at the Smith’s home in a small red trailer, which the rescue used to deliver her in. However, the mare that came off of the trailer was nothing like the description. A terrified chestnut mare stormed off the trailer, trying to flee the scene. It took all the strength of Karla and her father to get the filly just 50 feet to the nearest pasture gate. Upon turnout, the mare just ran circles, as if on a racetrack.

“I was actually fearful that she would run through the little fencing that we had up.”

When Karla finally attempted to get the mare into the barn, she finally saw the little details she had been missing. The mare was covered in manure and was easily 200 pounds underweight. The mare has been abused and neglected, to say the least. After checking the stall, feed, and water, Karla left the mare to calm down in her stall. The journey had only just begun for the pair.

Weeks passed before Megan’s Rainbow, now shortened to Megan, decided to give Karla any ounce of trust. While putting up a fight, Karla was finally able to give Megan a bath and get most of the dirt and manure caked on her. At age 14, however, Karla was anything but patient. The mare, surprisingly, let Karla tack her up with no issues, until it came time for the bridle. The mare was bit-shy, meaning she was afraid of the metal bit being put into her mouth. Karla invited her father, a complete stranger to the mare, to try and put the bit into her mouth. What a mistake.

“I didn’t think of that at the time,” Karla admits.

Megan, being the fireball she was, took matters into her own hands. When Karla’s father put his thumb into Megan’s mouth and in and attempt to get her to accept the bit, Megan lowered her head and thrust her head into his ribs! Karla’s mouth dropped, her father laid on the ground trying to catch his breath, and Megan stood there with her head held high, as if proud of her doing. With one failed attempt it the books, Karla untacked the mare, brushed her out, and left her to calm down. Karla needed a solution to this problem.

A hackamore was all it took, or at the time, a halter and two lead ropes. Karla successfully took Megan into the field and rode her at an easy walk, in hopes to not push her horse too far too soon. With their very first ride in the books, Karla felt better about their future. Trust was building in the right way. Megan knew she was safe where she was.

Karla’s home shared a driveway with a farm named Dublin Stables, LLC. One day, Karla took Megan over to the introduce herself to the owner, who turned out to be an extremely kind older woman, who even invited Karla to ride in both her outdoor and indoor arenas whenever she liked. With more and more riding, though, Megan showed some areas she truly needed to improve on. The major area was listening to Karla, both under saddle and on the ground.

“With confusion and slight frustration I went to ask the woman down the driveway. That’s when she introduced me to natural horsemanship and groundwork. It changed everything for Megan and I, as she became more willing, more docile, and much more trusting.” 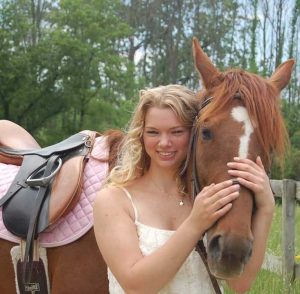 Time has a way of healing wounds, and Karla was giving Megan all the time in the world. Megan was trusting Karla more with every trail ride and adventure the pair took. Photo: Robin Smith

Time has a way of healing wounds, and Karla was giving Megan all the time in the world. Megan was trusting Karla more with every trail ride and adventure the pair took.

Karla, however, could not contain her curiosity for where her horse had come from. She looked up the mare’s information under her registered name. Megan’s Rainbow, a chestnut mare by Roo Art (a son of Buckpasser), had competed in 68 races, but only won two of them. She also finished second or third only seven other times.

With continued research, Karla also discovered that the mare had competed in her final race in January 2009. The story that came with Megan’s Rainbow when she arrived at Karla’s home in February 2009 was that she had been off the track about a year. To Karla’s surprise, this was not the case. Even more surprisingly, not even a week after finding out about the lie told by the “rescue,” Karla’s mother was contacted by the rescue, saying the original owners wanted the mare back and would pay $500 for her. The owners had figured the mare was infertile after attempted to breed her with no avail. The story was that the stallion was the problem, and so the owners wanted Megan back to turn her into a broodmare.

In 2011, Karla’s world was thrown for a loop when her parents ended their marriage. Karla needed Megan more than ever.

“Megan was always there for me to run too. She listened without judgment and had always lent me a shoulder to cry on.”

After a year, Karla and her mother moved into her mother’s boyfriend’s house, taking Megan and another mare named Essie, with them. The situation did not last long, however. A year following that move, they moved again into what is now their current residence. After moving Megan around through three different boarding barns in three years, Karla finally has a place Megan is happy to be. A happy horse is always a first priority.

“We’ve now started to get serious with stadium jumping and cross country.”

Megan is now a happy, sweet, full of life 16-year-old, thoroughbred that loves Karla to the fullest, and Karla could not have asked for a better journey with her best friend.

“[Megan] isn’t perfect and she is very opinionated, but I trust her with my own life…Megan and I have been together for a strong seven years and I plan to make that 17 more.” 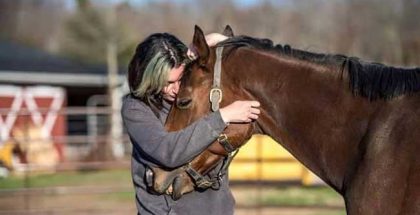 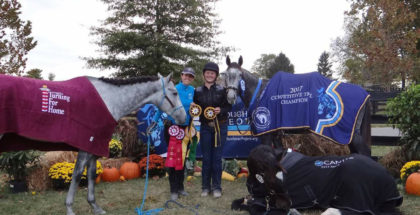 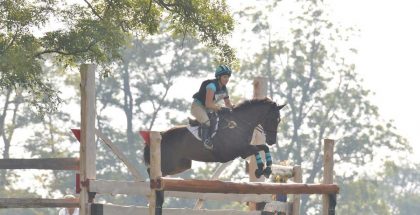 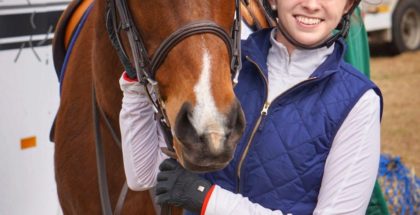