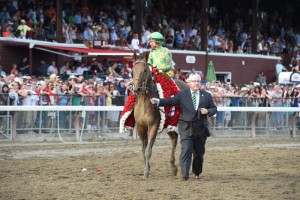 Keen Ice will race in the 2016 Breeders’ Cup Classic in his second race off an injury.

In 2015, before he became known as the horse to defeat Triple Crown winner American Pharoah, Keen Ice seemed to improve with each race. He put in good closing effort to run seventh in the Kentucky Derby (GI), before running a credible third in the Belmont Stakes (GI). The son of Curlin then ran a very impressive, fast-closing second in the Haskell IStakes (GI), before finally nailing American Pharoah in the Travers Stakes (GI), to earn his first grade one victory.

Unfortunately, after running the race of his life, Keen Ice tailed off with a pair of fourth-place finishes in the Breeders’ Cup Classic (GI) and Clark Handicap (GI) to end his sophomore season and 2016 didn’t begin much better as he could do no better than sixth in the Donn Handicap (GI), before being shipped to Dubai, where he made two starts and only managed to finish finishing seventh and eighth, the latter in the Dubai World Cup (GI).

Shortly after his return to the states and a transfer of care from trainer Dale Romans to Todd Pletcher was issued by owners Donegal Racing, Keen Ice was diagnosed with a distal cannon bone fissure fracture in his left hind and was given 60 days off at WinStar Farm in Kentucky. He was returned to Pletcher’s shedrow in late summer with a Breeders’ Cup appearance squarely in his connections’ crosshairs. In his first start in his return to action, Keen Ice finished a steady third in a one-mile allowance at Belmon and while the race may not have wowed onlookers, it certainly wasn’t a bad effort.

The distance certainly isn’t the best for the big, lumbering colt, especially when contested around only one turn but he did most of his running on the inside or between horses, even in his stretch drives, which is not always the place to be for a big, long-striding grinding type like Keen Ice.

Since that allowance effort, Keen Ice earned three consecutive bullet drills, including his latest— five furlongs in 1:00 4/5—giving his connections the confidence to pre-enter for the Breeders’ Cup Classic.

“I thought it was a good, solid work,” Pletcher said of the lastest morning drill. “We got what we were hoping for from a fitness standpoint. We’ll go into it with a fresh, fit horse. Now, we need a good pace in the race and a good setup for him.”

Reports at Santa Anita have indicated that the track is playing extremely fair unlike 2014, where many horseplayers complained that the track was too fast and speed-favoring. If Santa Anita stays true to its current fair form it would definitely be a plus for Keen Ice.

It is also highly likely that Pletcher will get the pace he is hoping for the later-running Keen Ice to close into as the three most highly regarded runners—California Chrome, Frosted, and Arrogate—all have flash serious early speed. California Chrome wired the field in his last two efforts, even dueling Dortmund into the ground in the Awesome Again Stakes (GI), while Arrogate set a blistering pace in the Travers Stakes (GI) at Saratoga to win by open lengths. And Frosted easily wired the field in the Whitney Stakes (GI), which was his last win this summer.

Keen Ice will undoubtedly be a longshot come post time on Saturday, but he may also offer some value if everything finally falls into place for the hard-trying bay.