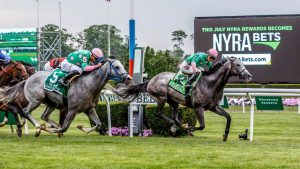 With the lack of major turf sprints in North America, the Breeders’ Cup Turf Sprint (GIT) often attracts horses of all shapes and sizes. With an oversubscribed field of 28 this year, the possibilities for where a winner will come from are endless.

New York will be represented by a strong pair of contenders in A Lot and Pure Sensation. Owned by Amerman Racing Stables LLC and trained by Chad Brown, A Lot has been knocking on the door for graded stakes success and most recently was second, beaten only 1 ¼ lengths, to top-class miler Tourist in the Fourstardave Stakes (GIT) at Saratoga in mid-August. Pure Sensation has ruled the Northeast turf sprint division this year with brilliant front-running scores in the Jaipur (GIIIT), Parx Dash (GIIIT), and Belmont Turf Sprint. Owned by Patricia A. Generazio and trained Christophe Clement, the gray son of Zensational figures to be a top contender. 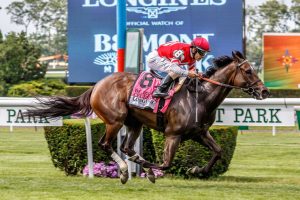 Celestine won the Longines Just a Game at ‪Belmont‬ in 1:31.64. Photo: Caris Photography

After the final entries were taken, Celestine is the only filly remaining in the main body of the field. Celestine blossomed into a star miler this spring with speedy scores in the Honey Fox Stakes (GIIT) and Longines Just a Game Stakes (GIT); most recently she was third to Photo Call and division leader Tepin in the First Lady (GIT) at Keeneland two weeks ago. Trainer Bill Mott and owners Phaedrus Flights LLC are hoping a cutback in distance will be the key to victory for her.

Three local contenders have been entered, headed by the eight-year-old war horse Obviously. All four of his previous Breeders’ Cup attempts have come in the Mile, a race that he is also pre-entered for this year, but after his final pre-Breeders’ Cup work, trainer Phil D’Amato indicated that his horse would go in the Turf Sprint. Obviously is owned in partnership by Fanticola and Scardino. Another speedster cutting back in distance is Om, who holds two grade 2 wins over the Santa Anita turf course. Om is owned by the Sareen Family Trust and trained by Dan Hendricks. The final Californian contender is Ambitious Brew, who scored his first graded stakes victory last out in a division of the Eddie D. Stakes (GIIT) on the downhill turf course. The California-bred gelding is owned by Pamela Ziebarth and trained by Martin Jones.

Canada’s 2014 champion sprinter Calgary Cat will make the trip south after an impressive victory in the Nearctic Stakes (GIIT) at Woodbine last out. Having struggled to find his 2014 form last year, the 6-year-old gelding seems to be rounding back into top form. The chestnut son of Cowtown Cat is owned by Stephen Chesney and Cory S Hoffman and trained by Kevin Attard.

A quartet of European contenders are shipping in for the race, headed by the David O’Meara-trained Suedois. A group 3 winner in his native France, Suedois has been second or third in three group 1 races this season. Suedois is owned by George Turner. Al Shaqab Racing’s group 1-placed gelding Karar is cutting back in distance after finishing second to Limato for trainer James Wilgan in his most recent start. Home of The Brave, a dual group 3 winner, will be making his first venture at the top level for owners Godolphin Racing and trainer Hugo Palmer. Aidan O’Brien has a colt for Coolmore in this race with the multiple group 1-placed son of Zoffany, Washington DC.

Drawing into the main body of the field was the 6-year-old son of Midnight Lute, Holy Lute for trainer Jim Cassidy and Class Racing Stable. Holy Lute scored his first graded stakes victory over this course last out in a division of the Eddie D Stakes (GIIT).

The also eligibles are Lady Shipman, who will likely run in the Senator Ken Maddy (GIIIT) on the undercard, and Green Mask.

Jockey C.J. McMahon: Texas Chrome the Ride of a Lifetime