Post Favors Keen Pauline in Black-Eyed Susan Stakes: Picking a featured filly with a good chance to win this race proved difficult. The ones coming out of stakes attempts lost while the the recent winners are jumping from maiden and allowance starts to run here in the Grade II Black-Eyed Susan at Pimlico on Friday, May 15, 2015. One of those horses jumping from an allowance race is Keen Pauline, owned by the famous Stonestreet Stables and trained by Dale Romans. She offers a couple of intriguing angles beyond the connections, too, including experience against quality fillies and the right post position for the expected pace scenario. 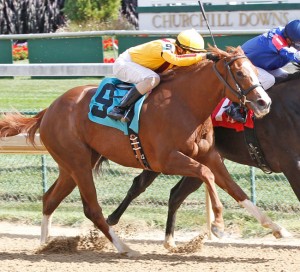 From a race strategy perspective, Keen Pauline has a great spot coming out of the ninth post position in the 2015 Black-Eyed Susan Stakes because, to the left, Luminance is expected to clear the field early.
Photo: Reed Palmer, Churchill Downs

Keen Pauline currently owns one maiden win in five tries and just over $30k in earnings. She will not immediately catch anyone’s attention. Cross out the turf try and only look at the dirt races, though. All of the races were strong efforts, and she finished fourth or better in each one.

The races in which she competed were maiden and allowance races “in name,” but glance at some of those fillies in her past performances. Even without seeing the entire chart, the Churchill Downs maiden win stands out because the third-place finisher was Oceanwave. Oceanwave finished seventh in the Grade I Kentucky Oaks, defeating fellow Black-Eyed Susan contender Include Betty, plus Eskenformoney, Forever Unbridled, and Puca. Moving on to Keen Pauline’s next race, she finished second in an optional claimer where the two fillies that sandwiched her were Simply Confection and I’m a Chatterbox. Later on, I’m a Chatterbox went on a rampage at Fair Grounds and swept their filly prep races before finishing third in the Oaks.

Her two most recent tries came with excuses. Keen Pauline competed at Gulfstream Park where Eskenformoney won and she finished third. The comments on the right note that Keen Pauline ran four-wide, and the pace ratings indicate they went slow. Maybe Eskenformoney slipped away with an easy lead in that one. Keen Pauline then went on a three-month break and reappeared in a six-furlong Keeneland allowance race where she finished fourth by two lengths. Considering the layoff and shorter distance, that loss is forgiven, too.

From a race strategy perspective, Keen Pauline has a great spot coming out of the ninth post position because, to the left, Luminance is expected to clear the field early. Luminance is also going to wipe out any inside filly with a brave jockey who tries to challenge her. But, Luminance’s ability to last nine furlongs is questionable. Her sibling The Pulse is a sprinter that broke sharply and faded in his only route effort. Luminance contested the lead and faded in her only try beyond one mile. If Luminance fades, Keen Pauline’s expected early fourth or fifth running position will offer an opportunity at first run in the clear. Adding to her chances of a decent trip, jockey Javier Castellano takes the mount, and he is one of the most intelligent riders today.

Despite the concerns about Luminance, this filly has talent as well, and if she clears the field and forgets to stop, few observers will be surprised. None of her opponents in this race possess natural breakneck speed, and there is nothing more dangerous in dirt racing than a horse out alone on a clear lead entering the far turn. Trainer Bob Baffert is no stranger to winning stakes races, and jockey Martin Garcia rode this filly in her three races, which makes him familiar with the horse.

Keen Pauline and Luminance are the two best choices for horizontal wagers. Other interesting contenders exist in this evenly matched field as well. For example, Danessa Deluxe improved under trainer Jorge Navarro. Ahh Chocolate is undefeated in two starts. Include Betty ran into trouble in the Kentucky Oaks, and Sweetgrass won a Keeneland allowance race. Those needing more than two choices for pick threes and pick fours should choose from one of those other four. They also make the best fillies to use underneath or with Keen Pauline and Luminance in exotics.