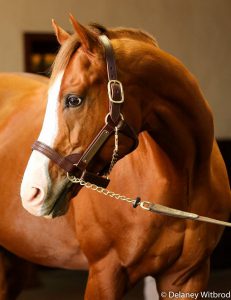 Champion Will Take Charge is on the path to take charge of the freshman sire class of 2018, when his first crop will be 2-year-olds. Currently, the stallion is the #1 freshman weanling sire at auction with his highest weanling bringing $350,000 at Keeneland last November.

Will Take Charge stands at Three Chimneys Farm in Midway, KY, along side established sires such as Sky Mesa, Palace Malice and Caleb’s Posse. Will Take Charge is one of many successful sons of Unbridled’s Song, but one who currently holds a major advantage as he is a fairly priced stallion despite a highly successful racing career.

While Will Take Charge was a precocious colt at two, his best year was undoubtedly his 3-year-old season. While unplaced in the Triple Crown races he broke through with top performances in tough races like the Jim Dandy Stakes (GI), Travers Stakes (G1), Pennsylvania Derby (GII) and the Breeders’ Cup Classic. He was narrowly defeated in the Breeders’ Cup Classic by Mucho Macho Man and finished up 2013 with a win in the Clark Handicap (GI) at Churchill Downs over Game on Dude. Will Take Charge finished strong enough in 2013 to be named champion 3-year-old male.

At age four, Will Take Charge only finished off the board in one start, winning or hitting the board in five of his six races overall. He won the Oaklawn Handicap (GII) but experienced a case of seconditis finishing as runner-up in the Donn Handicap (GI), Santa Anita Handicap (GI) and the Stephen Foster (GI). He also finished third in the Whitney Stakes (GI). 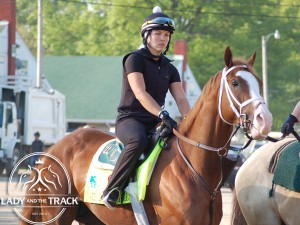 Will Take Charge was retired in September 2014 with a slight strain to a branch of his suspensory apparatus. He earned just shy of $4 million in his career, winning seven of his 21 races.

Bred in Kentucky by Eaton Farm, Will Take Charge was a $425,000 Keeneland September sale yearling. He raced for Willis Horton, who later sold an interest in the colt to Three Chimneys.

Grant Williamson, Three Chimneys’ director of stallion nominations and sales, said he’s thrilled with the response to Will Take Charge as a stallion so far.

“The commercial market is very important and we’re happy his average is up there,” Williamson said. “We think that will go up at the yearling sales next year. He’s been booked full the last two years at $30,000 and demand is good again at $30,000; he’s filling up fast for next year.

“We’ve been very careful about pricing our horses. We feel like we price them fairly in the marketplace and give breeders a chance to make money. In the long term that will help us. I’ve had other breeders say they like what they see, the way he stamps the foals. They’re very athletic, correct, good-moving, and have plenty of size to them. They just keep improving.”

Will Take Charge is out of the Dehere mare, Take Charge Lady, and is a half-brither to Take Charge Indy (A.P. Indy), who won the Florida Derby (GI); and Charming, dam of Champion Take Charge Brandi (Giant’s Causeway).