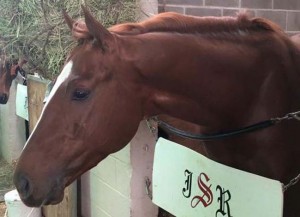 Dolphus must improve in order to earn recognition for reasons beyond his legendary older sister. He had a clear run in his last start, against an ordinary field and simply failed to finish off the job. Yet, Sharp remains optimistic.

“We’ve always had that race in our minds and he gained a ton out of his last race. He physically looks more athletic and is starting to lose that baby fat and look like an older horse,” Sharp said more than a week ago.

Horses such as Dolphus tend to be given more consideration because of the family. Regardless, his ceiling is unknown, and if bettors want to believe a jump will come, there is no better stage in a horse’s career to expect this than early on.

Pedigree nerds also love Destin, a full brother to Creative Cause, who ran fifth in the 2012 Kentucky Derby. Sired by Giant’s Causeway and out of the stakes-winning dam Dream of Summer, Destin certainly owns the right bloodlines.

With Todd Pletcher behind him, he has a top-class trainer as well. Twin Creeks Racing Stables owns Destin. Can he move forward? He will need to progress, especially from post 13.

“We were leaning toward scratching with the 13-hole, but we want to see how he’ll perform at the Fair Grounds,” said Randy Gullatt, racing manager for Twin Creeks.

Destin’s last start at Gulfstream Park does not appear too impressive either. From an outside post position going one turn, he ran second next in the initial stages, made a mild move around the turn and failed to pass the pacesetter in the lane.

At least, Destin won his maiden race at Belmont Park after hitting the gate. Plus, he comes with a bullet workout, which is uncommon for him. He should improve as a young horse working his way through the Derby trail. Gullatt believes Destin just needs to focus better while running. The blinkers come on for the first time.

“In his second effort he seemed to be looking around more than he was running, so we decided to put blinkers on him and his last two works have been very good with them,” Gullatt said in a recent interview with Fair Grounds Barn Notes WriterMichael Adolphson.

The BRIS computer system ranks Destin seventh in their Prime Power rankings. But, again, these are young horses. Destin, with only two career starts, a fantastic pedigree and great connections, can make the proper leap even from his outside post.

Other bettors might consider Fish Trappe Road from post position two instead of the above contenders. While he only competed against New York-bred horses so far, he ran well when stretched out. Even in Fish Trappe Road’s recent loss at Belmont Park, he set fast fractions (:23 and :46 for the first two quarters) before understandably tiring late.

The Lecomte lacks any real “need-the-lead” types and Fish Trappe Road can become brave on the lead.

If not sold on Fish Trappe Road either, why not try Uncle Walter? He broke his maiden at Keeneland by a neck and finished second in an optional claimer at Churchill Downs. In other words, nothing in his form appears special. Nevertheless, Michael Maker trains this horse for Kenneth and Sarah Ramsey. Like Destin, maybe he moves up with experience.

Picking a winner seems difficult. These horses are liable to fire the best race of their careers in this spot. For value and in terms of post position, Fish Trappe Road will be a good choice to use on top in most tickets. Mo Tom brings his class. But, Dolphus and Destin are the big-pedigree horses and it will be fun to see their performances this weekend at Fair Grounds.