The Kentucky Oaks (GI), the sister race to the Kentucky Derby (GI) and contested the first Friday of every May at Churchill Downs, is the main target for 3-year-old fillies every spring. In years past, the filly to wear the blanket of lilies under the Twin Spires has gone on the win the Eclipse Award as division champion, the most recent being Untapable in 2014. Looking ahead to next year, the top juvenile fillies are already competing for the lucrative points needed to earn a spot in the 2017 Kentucky Oaks starting gate. Who are the elite so far heading into the New Year and are any of these fillies on your list? 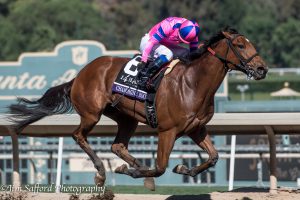 Champagne Room (Broken Vow – Lucky to Be Me, by Bernstein) – Champagne Room was the upset winner at 30-1 in the Breeders’ Cup Juvenile Fillies (GI). She has only finished worse than third once in her five-race career and though she only owns two wins, both came in stakes – the Sorrento Stakes (GII) at Del Mar this past summer and the Breeders’ Cup. Her sire, Broken Vow, was a successful runner on dirt yet has produced multiple quality turf horses, including Rosalind, Cyber Secret, Rainha Da Bateria and Divine Oath. Champagne Room’s dam was successful on dirt, but her damsire, Bernstein, is seen as a strong turf influence. For now Champagne Room is the top contender for the Oaks after her decisive win in the Breeders’ Cup. (21 points)

Valadorna (Curlin – Goldfield, by Yes It’s True) – A fast-closing second in the Breeders’ Cup Juvenile Fillies, Valadorna was given a rest for the remainder of 2016 by trainer Mark Casse. She broke her maiden at second asking at Keeneland at 1 1/16 miles and has finished either first or second in all three of her starts. Damsire Yes Its True has been represented by many horses with speed, including The Big Beast and La Verdad, but an overall pedigree analysis shows it’s hard to say yet if the nine furlongs of the Kentucky Oaks is right up this filly’s alley. (8 points)

Shane’s Girlfriend (Adios Charlie – Western Tornado, by Proud Citizen) – This filly is two-for-two in her short career. She broke her maiden at first asking at Santa Anita in the fall before trainer Doug O’Neill shipped her to Delta Downs for her graded stakes debut in the Delta Princess Stakes (GIII), where she annihilated the field by 13 1/4 lengths. Sire Adios Charlie was successful up to eight furlongs on the dirt, but he did finish second in the nine-furlong Peter Pan Stakes (GII). And though her dam was unraced, her damsire has produced horses successful on both turf and dirt, including Golden Soul, Proud Spell and Believe You Can, the last two being recent winners of the Kentucky Oaks. Shane’s Girlfriend shouldn’t struggle too much with the nine furlongs in the Kentucky Oaks. (10 points)

Daddys Lil Darling (Scat Daddy – Miss Hot Salsa, by Houston) – Daddys Lil Darling has been only worse than second two times in her six-race career having finished fourth in her debut and also in the Breeders’ Cup Juvenile Fillies. Daddys Lil Darling is a come-from-behind runner who has an amazing turn of foot, and while heavily bred for turf (her half-brother is Mongolian Saturday) she has been thriving on the dirt. She also hails from a female line infused with multiple stamina influences, including Seattle Slew, Alydar and Damascus. Daddys Lil Darling is likely to have no problem with the Kentucky Oaks distance, but if a full field lines up against her in five months can she handle the traffic in the homestretch? (20 points)

Farrell (Malibu Moon – Rebridled Dreams, by Unbridled’s Song) – This half-sister to Carpe Diem (Giant’s Causeway) likes to run on the lead and never look back, which is exactly how she won the Golden Rod Stakes (GII) over Daddys Lil Darling at Churchill Downs. Farrell is bred to be a successful filly, as daughters of Malibu Moon tend to be precocious and fast early yet remain consistent throughout their careers. While dam Rebridled Dreams was not the most consistent horse, she was sound and ran for three seasons before being retired. Unbridled’s Song continues to prove that he is a top influence in both speed and stamina and this filly looks poised to be a top contender in the division in 2017. (10 points)

American Gal (Concord Point – American Story, by Ghostzapper) – As the lukewarm favorite in the Breeders’ Cup Juvenile Fillies, American Gal overcame a bumpy and tiring trip to finish third behind Champagne Room and Valadorna. She is a granddaughter of Tapit, the sire of two Belmont Stakes (GI) winners, and also Breeders’ Cup Classic winner Ghostzapper, so clearly distance for her shouldn’t be a problem. Also she seems to own speed to burn and the talent to carry her speed a route of ground. She most recently finished second in the Los Alamitos Starlet (GI) to Abel Tasman. (8 points)

Abel Tasman (Quality Road – Vargas Gal, by Deputy Minister) – This filly won the Starlet over a heavily favored American Gal, running right by her chief rival after having a well-sustained stretch drive. Abel Tasman has a pedigree that could possibly take her the nine furlongs of the Oaks, and she appeared to have more in the tank as she ran past the wire in the Starlet. Quality Road offspring are winning at an average of just over seven furlongs, but the filly should get some additional stamina from her female family, which includes Buckpasser and Turn-To. (10 points)

Sweet Loretta (Tapit – Ithinkisawapudycat, by Bluegrass Cat) – Sweet Loretta was undefeated going into the Breeders’ Cup Juvenile Fillies, but quickly showed that she may not have been the same quality runner she indicated she was in her races on the East Coast. In her defense, she had a very tough trip that day, which included bumping and stumbling in the traffic jam in the first turn, and may have just needed more racing luck. She absolutely is bred for the Kentucky Oaks distance and trainer Todd Pletcher will more than likely give her another shot at two turns. (0 points)

Jamyson n’ Ginger (Bernardini – Ginger Brew, by Milwaukee Brew) – This Rudy Rodriguez trainee broke her maiden in her third start at Belmont Park going a mile on the main track. She finished fifth in the Breeders’ Cup Juvenile Fillies, where she had a bit of a traffic issue in the beginning stages before saving ground for most of the remainder of the race. She was swung out in the final turn for clear running room and launched a mild bid, unfortunately running out of ground before the wire came. She has a solid pedigree and should improve with age; dam Ginger Brew is the second-highest earner for Milwaukee Brew, as she is a Canadian champion, multiple stakes winner and graded stakes-placed. Milwaukee Brew was a multiple winner at the classic distance, capturing the Santa Anita Handicap (GI) twice at age five and six. Jamyson n’ Ginger should surely improve with age and distance. (4 points)

Union Strike (Union Rags – Classic Strike, by Smart Strike) – After a troubled trip in the Breeders’ Cup Juvenile Fillies where she was rank, bumped and forced wide, Union Strike looked good training at Santa Anita in the weeks since for trainer Craig Dollase in preparation for the Los Alamitos Starlet (GI). Union Strike is one of two Grade I winners for sire Union Rags, having won the Del Mar Debutante (GI) impressively, and though she should mature well with age and more racing experience, her fifth-place finish in the Starlet limits her to a lower placing on this list until she returns to form. (0 points)

Dancing Rags (Union Rags – Home Court, by Storm Cat) – Dancing Rags looked poised to be a top filly going into the Breeders’ Cup, but after a rough early trip that day and weakening before the stretch run she could only manage an eighth-place finish. She has yet to record a work since, but trainer Graham Motion does a good job of giving many of his horses time to recover and mature with winter breaks. Dancing Rags is a half to Coup de Grace (Tapit), who was a graded stakes-winning sprinter. This filly may like the middle distances more than the longer, but she likely will get another chance around two turns as she did so well in winning the 1 1/16-mile Darley Alcibiades Stakes (GI) at Keeneland in the fall. (10 points)

Cajun Delta Dawn (Kantharos – Cajun Dawn, by Awesome Again) – This filly is a three-time minor stakes winner, sweeping two of the three Florida Sire Stakes series races, and in her graded stakes debut in the Delta Princess logged a second-place finish to the freak performance by Shane’s Girlfriend. Cajun Delta Dawn is by Kantharos, who is the sire of highly regarded sprinters X Y Jet and Mr. Jordan, and while her dam was unplaced in nine starts, Awesome Again is proving to be an effective damsire and has been represented by some good runners, including Travers Stakes (GI) winner Keen Ice. Cajun Delta Dawn may not be effectively bred for nine furlongs, but she was the best of the rest in the Delta Downs Princess and has the chance to improve off that effort. (4 points)

Miss Sky Warrior (First Samurai – Sky Minister, by Conquistador Cielo) – Miss Sky Warrior is a two-time graded stakes winner, most recently winning the nine-furlong Demoiselle Stakes (GII) at Aqueduct and showing early that she’s capable of getting the Kentucky Oaks distance. However when watching the replay it appears as if her stride shortens and she struggles home, which could be cause for concern moving forward. Could it have been the track? Was the race too long and she just was able to get to wire first? This filly is out of a minor winner, who is sired by 1982 Belmont winner, Conquistador Cielo, and her sire has been able to produce some solid distance runners, including Lea, Last Gunfighter, Executiveprivilege and Carve. She may be able to run more effectively with more experience, but her slow Demoiselle time may prove that she could be a notch below the others. (10 points) 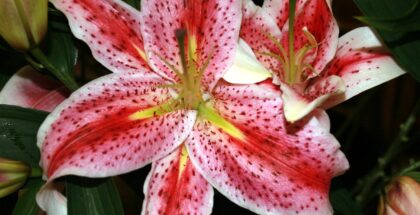