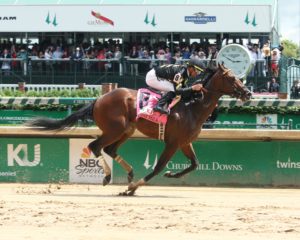 Saturday’s $100,000 Mr. Prospector Stakes (GII) at Gulfstream Park drew a field of 11 sprinters whose connections are looking to get a last graded stakes victory of 2018 under their belts. The race is named for the great sire Mr. Prospector, who never actually raced at Gulfstream Park (though he briefly stood stud in Florida) but sure produced enough talented offspring who did, never mind countless champions in every hemisphere and names who appear on countless sales catalog pages even today. Now nearly 20 years after his death Mr. Prospector is remembered in names like Forty Niner, Seeking the Gold, Machiavellian, Gone West, Gulch, Afleet, Conquistador Cielo, Smart Strike, Fusaichi Pegasus, and many, many more.

After finishing second in a Churchill Downs allowance race last month, Calumet Farm’s Wild Shot returns to face graded stakes company here. Trained by Rusty Arnold, the son of Trappe Shot has been training well forthe seven-furlong sprint in what will be his second start since a troubled last-place finish in the 2017 edition of the H. Allen Jerkens Stakes (GI) at Saratoga.

“He just wasn’t going well,” Arnold said of the layoff. “He didn’t run well at Saratoga at all. We turned him out for a good long while. He had a problem at the farm before he came back to me and he needed more time – nothing major, no surgery.

“He’s a year older. He grew up. He’s an absolutely beautiful horse.” 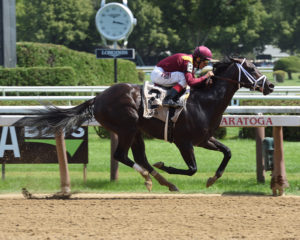 Grade 2 winner Coal Front is also in the middle of a comeback after a lengthy break of more than a year and one start so far on the books in 2018. The Robert LaPenta and Head of Plains Partners-owned son of Stay Thirsty, who is trained by Todd Pletcher, finished fifth in the November 2 Bold Ruler Handicap (GII) and has been training well at Pletcher’s winter base of Palm Beach downs for about a month.

Coal Front won the 2017 Amsterdam Stakes (GII) at Saratoga and the Gallant Bob Stakes (GII) in 2017. Pletcher’s go-to jockey John Velazuez will be aboard.

Ron Paolucci’s Loooch Racing Stables and trainer Anthony Quartaroli will send out two — Uno Mas Modelo and Storm Advisory. Uno Mas Modelo carries a two-race win streak in non-graded stakes company, one at Churchill Downs and the other over this track earlier this month after a dismal showing in the Jockey Club Gold Cup last September. Back at a distance where he excels (three wins from five starts) and a track he’s been successful over, the son of Macho Uno figures to show more back in graded company here. Storm Advisory, who was haltered for $80,000 at Churchill Downs on September 27, won a Thistledown allowance before his connections tossed him to the wolves with his stablemate Sightforsoreyes in the Clark Handicap (GI) where he beat only his stablemate in crossing the line in seventh.

Albin Jimenez will ride Uno Mas Modelo and Robby Albarado will be aboard Storm Advisory.

Heartwood, who was once a $500,000 yearling RNA at Keeneland and started his career for the partnership of Three Chimneys Farm/Bridlewood Farm and trainer Steve Asmussen, was picked up by his current connections for $70,000 at Fasig-Tipton in the summer of 2107 and has had a bit of an up-and-down career since, winning some rich Keeneland allowances against good horses, but failing in others, winning some softer stakes and failing in others. He is coming off a nice second in the Fall Highweight Handicap and may be worth a shot here. Irad Ortiz Jr. picks up the mount.

Sweetontheladies, Belle Tapisserie, K Choice and J. S. Choice round out the field. The Mr. Prospector Stakes has been carded as the 10th race with a post time of 4:36 p.m. ET.