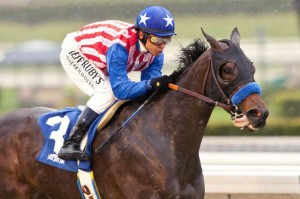 Awesome Baby was the pace setter with jockey Mike Smith leading her to the front of the pack and the win in the 2014 Sunland Park Oaks. Awesome Baby the 1-2 favorite coming into the race was unyielding despite challenges from opponents Empress of Midway and Lucky for You, and Awesome Baby ended up posting a time of 1:43 4/5. Empress of Midway and Lucky for You finished in a tie for second place with D’ya Knowwhatimean and George’s Peach following behind to round out third and fourth place.

After the 2014 Sunland Park Oaks jockey Mike Smith said, “She kind of scrambled a bit leaving there, and then she got into her high cruising speed, which is her game.”

Trained by Bob Baffert, Awesome Baby has won her last three starts and looks promising in the future. Awesome Baby and Mike Smith received a warm welcome and lots of praise at this race as Smith had major supporters out there rooting for him and there was even a record breaking attendance.

Smith said, “I’ve got my whole family here…I hear there’s a record attendance. Half the grandstand is my family.”

Hopefully the Oaks will prove to be just as exciting for Awesome Baby.

Chitu takes the win at the 2014 Sunland Derby