Keen Ice Seeks Rebound in Clark at Churchill Downs: Dortmund’s absence from the Clark Handicap (GI) on Friday at Churchill Downs leaves a noticeable hole. The race must go on though, as a steady group of three-year-old colts and older horses will compete for $500,000 and a prestigious graded stakes event to add to their resume. 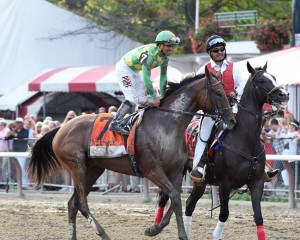 The most recognizable contender in the 2015 Clark Handicap appears to be reigning Travers (GI) victor Keen Ice. He lost eight straight races before his breakthrough at Saratoga Race Course over the legendary American Pharoah.
Photo: Coglianese/NYRA

The most recognizable contender appears to be reigning Travers (GI) victor Keen Ice. He lost eight straight races before his breakthrough at Saratoga Race Course over the legendary American Pharoah.

To be fair, Keen Ice also owns a late-developing pedigree as a son of Curlin. After a troubled third in the 2007 Kentucky Derby (GI), Curlin progressed and earned the 2007 and 2008 Horse of the Year awards.

Curlin’s progeny improve with time and Keen Ice’s dam Medomak promotes the same quality. Medomak’s sire Awesome Again had an undefeated four-year-old season in 1998. The previous year, he lost a couple of races.

“I told everyone early in the year that he was like a seventh grader playing basketball tripping over the free throw line. Today he’s Shaquille O’Neal at best,” Romans said.

In the Holy Bull Stakes (GII) at Gulfstream Park, he failed to pass Bluegrass Singer and Juan and Bina in the stretch. Those two names are not found in news articles today.

At Fair Grounds, War Story finished ahead of Keen Ice twice in a row. If War Story entered the Clark, he would run as a no-hope longshot coming off an eighth-place finish in the Breeders’ Cup Dirt Mile (GI).

In the Kentucky Derby, Keen Ice failed to get a suicidal pace and ran into traffic problems as well. Romans commented on his colt’s Derby attempt for the same article.

“If you watch the race at the three-eighths, we get completely shut down and have to start over. He’s a one-run horse; he didn’t get clear again until the eighth pole and galloped out strong,” Romans explained.

In the Belmont Stakes (GI) and Haskell (GI), Keen Ice showed real development. He endured a wide trip in the Belmont and never gave up, finishing third in a performance better than the result indicates.

Keen Ice fared better in the Haskell, only losing to American Pharoah by just over two lengths. Some might argue American Pharoah slowed down nearing the finish line on purpose, but he likely felt tired from the early duel.

Finally, Keen Ice put everything together in the Travers, before finishing fourth in the Breeders’ Cup Classic (GI). No horse pressured American Pharoah early in the Classic, leaving a difficult job for closers.

He confidently predicted, “What I think you’ll see at this time next year is a horse that will be talked about as Horse of the Year or Champion Older Male.”

A month ago, Crawford said in an article for The Courier-Journal “We’re just going to go ahead and win the Breeders’ Cup Classic” before the colt failed to make an impact.

For the Clark, the Keen Ice team needs help from an uncertain pace scenario. Mr. Z and Shotgun Kowboy will contend for the lead. If other horses run with those two speed types long enough, expect Keen Ice to mow them down. Effinex, the Classic runner-up and winner of “best name” award, should also provide a late challenge.

Perhaps, as Romans predicts, winning the Clark can be a stepping stone to bigger things for Keen Ice.