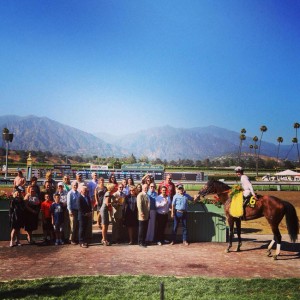 Jockey Tyler Baze was ecstatic after taking the Santa Anita Gold Cup win saying, “To do this for Sean, it means a whole lot for the guy that stood by my side. He gave me an opportunity to ride this horse first time out. I’ve gotten to know him, learn about him and learn how to ride him and I never lost any bit of faith in him.

Baze added, “From the first time I got on him, I told Sean, ‘This horse will make you. We’ll win the Breeders’ Cup with him.’ I’m just looking forward to that and now we’re goin’ fishing! The guys that keep you going in these smaller barns, it just means so much. They have stood by me and they’ve been there for me. I’m happy to be able to do this so maybe 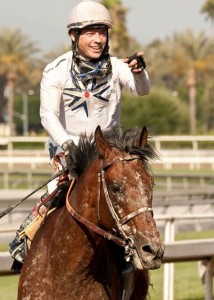 they can get bigger. I knew we would win last week after I worked him. I told him we were going to win today. We said if we won, we’d be going fishing on Sunday so we might just be leavin’ tomorrow night!”

Trainer Sean McCarthy said after the 2014 Gold Cup, “It worked out perfectly for us (pace-wise). The horse had a great week, a great 10 days. The T’s were crossed, the I’s were dotted, and you just hope that when you lead him over there, he fires, and he fired. I couldn’t ask for a better trip, I couldn’t ask for things to have been any better.”

Sharron Stone, who presented the 2014 Gold Cup trophy stated, “I’ve been up in the Chandelier Room, and when you see these tiny saddles that the jockeys sit on, you realize how much athleticism is involved. To see the dirt on the winning jockey’s face, it’s so emotional. It means it was so challenging, he had to persevere in order to win. It’s been a great day. The joy of the food, the horses, the people and being in the Chandelier Room, which is so swanky; it’s just fantastic.”

The world looks forward to seeing more from Majestic Harbor as the 2014 Breeders’ Cup Championship approaches.