La Jolla Handicap 2014; Rock Hard Field of Six Ready To Rumble: The 74th running of the GIII La Jolla Handicap is Saturday, August 9th, 2014 at Del Mar Racetrack in Del Mar, California for 3-year-olds ready to mow the lawn going 1 1/16 miles over the infield Jimmy Durante turf course for a purse of $150,000. We’ll see what happens this week with the races being taken off the turf. I have to say it’s been a disappointing meet having to run the turf races on the synthetic. Here’s to hoping they get the problems ironed out soon. 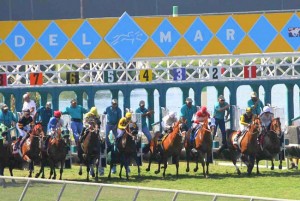 The 74th running of the GIII La Jolla Handicap is Saturday, August 9th, 2014 at Del Mar Racetrack in Del Mar, California for 3-year-olds ready to mow the lawn going 1 1/16 miles over the infield Jimmy Durante turf course for a purse of $150,000.

The race is named after none other than the city itself, La Jolla and has been downgraded from a (GIII) to a (GII) for this years running. It is also the final stepping-stone for the (GII) Del Mar Derby set for Sunday, August 1st. The race record is held by the Candy Ride son Sidney’s Candy set in 2010 at 1:39.52. Last year the race was won by the now deceased Scat Daddy kid Dice Flavor with the now retired Garrett Gomez up.

Last weekend Sigi nailed the win in the Whitney with Moreno running them off their feet gate-to-wire. My top pick and Sigi’s second Itsmyluckyday hung in there for second with my second pick Will Take Charge nailing third. Palace Malice threw in a race that blew up my Twitter feed with a lot of head scratching. All I know is we were banking on the speed holding up and winning, which it did. So on to this weeks race and let’s take a look at who we like.

I’m going with a Rock Hard Ten double here. Even crazier, I’m going with the Rock Hard Ten boy Tonito M who is getting his first shot on the lawn Saturday. I’m thinking Hollendorfer has him ready and figured, why not? He has not won on the dirt here in his first three races, why take a shot on the grass? It will be his fourth run in the U.S. where he recently finished 3rd on the dirt at 1 1/8 in the Los Alamitos Derby behind the unbeaten Shared Belief. He has the pedigree for the turf plus his dam has produced 1 winner on the lawn. He came to the U.S. to race in February after racing at Camarero with a record of 8:6:2 on the dirt. He has two works on the Del Mar all-weather track and one work on July 20th on the Del Mar Turf going 5f in 1:02.40. He needs to step it up here but I like his post position leaving #5 with Espinoza riding him again. Hopefully he has some decent odds out of this bunch.

I also like another son of Hard Rock Ten Sammy Mandville who last out ran 4th behind Enterprising and Argyle Cut, both whom he faces again here, in the one mile Oceanside Stakes on the turf at Del Mar. That race he broke through the gate at the start, then rallied on the rail, and around foes to be edged out for the show. The Doug O’Neill trainee broke his maiden at Santa Anita on the turf going 1 1/8 on May 4th and with the cutback to 1 1/16, I think he has a shot. Sammy gets post #4 with Bejarano in the saddle.

*Note: Often times I play more than one ticket the day of the race. Coming up with a play a few days before a race isn’t my typical way of wagering. I often get a vibe and will play something else depending on odds or something I see on the track. Last weekend my play for this article didn’t hit and I didn’t like the play come Saturday morning. I wagered my article play as well as a different one adding Moreno, and the other one hit. The more I looked at how the race stacked up, the more I thought he had a good chance to wire the field, which he did. So if you are so inclined, please follow my twitter feed the day of the race @horseflynawall as I always tweet out my plays.

Despite the short field, the La Jolla Handicap is a tough race. This time I’m using two horses. Schoolofhardrocks had trip troubles in his last race and now with a clean trip, he will be very tough and surely the favorite of the race. However, I’ll try to beat him with Argyle Cut, a horse that is running like the devil and this time should not be the exception. This is the kind of horse that always runs well and offers good value.

Good luck to everyone and safe ride Saturday. Many thanks to Sigi for adding his picks and plays. I’ll make sure to play his as well, he’s always on fire.