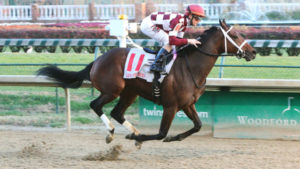 In four of the last 10 years, the winner of the Fair Grounds Oaks (GII) has gone on to Kentucky Oaks (GI) glory and with the big Tapit filly Unique Bella off the trail, Farrell will look to continue her winning ways in this year’s edition of the race and take over Oaks favoritism. Winning won’t be easy, with several up-and-coming fillies lined up to face her.

The Coffeepot Stable-owned, Wayne Catalano-trained daughter of Malibu Moon is a half-sister to the multiple grade one winner Carpe Diem and in her most recent start, she won the Rachel Alexandra Stakes (GII) in front-running fashion. However, she has shown the ability to rate kindly in previous races and won her past three races by a combined 12 ¼ lengths. Catalano could not be any more confident in how his charge is training up to the race and should Farrell cruise to another easy win, she will likely become a heavy favorite for the Oaks, barring the results of the other prep races.

Mark Casse has both Summer Luck and Corporate Queen entered, however Summer Luck did not ship from her Palm Meadows base and will scratch. Corporate Queen will be making her third lifetime start and second start for Casse after being purchased privately on behalf of Gary Barber and Bobby Flay following her debut win. In her first start for Casse the daughter of Colonel John was second in a first level-allowance going seven furlongs at Gulfstream behind Gulfstream Park Oaks (GII) entrant Nonna Bella. Her connections believe that the filly will take a huge step forward stretching out around two turns for the first time.

Calumet Farm’s Neil Drysdale-trained Vexatious is shipping in from California in hopes of earning her way into the Kentucky Oaks starting gate. A half-sister to Destin and Creative Cause, she was a fast-closing third to eventual grade three winner Shane’s Girlfriend on debut, and came right back to break her maiden impressively in her next start. With few options on the California circuit, her trainer opted to put her in with the boys, where she finished a solid third behind top Kentucky Derby (GI) contenders Reach the World and Battle of Midway.

Wayne R. Sanders and Larry Hirsch will be sending out a talented daughter of Gemologist in the Bret Calhoun-trained Daria’s Angel. After two starts sprinting, the filly stretched out and took a big step forward, leading all the way and cantering home to an eight-length win. If she chooses to use the same running style this time around, she will have to contend with Farrell early. Should she pull the upset and win, her $45,000 yearling purchase price may start to look like a big bargain.

Rounding out the field are maiden winners Queen Bernardina. The maiden Majestic Quality did not ship and will be rerouted to the Santa Anita Oaks (GI).

Carded as the tenth race on the program, approximate post time for the $400,000 Fairgrounds Oaks is 3:41 pm CT.