Mr. Z May Defeat International Star in Louisiana Derby: Few horses have disappointed more in recent months than Mr. Z. After losing as the favorite in the ungraded Smarty Jones and Grade 2 Southwest, both at Oaklawn Park, Mr. Z lost supporters with his apparent distaste for winning. In fact, Mr. Z ran ten times in his career and only won once. On the positive side, he finished in the money 80% of the time. 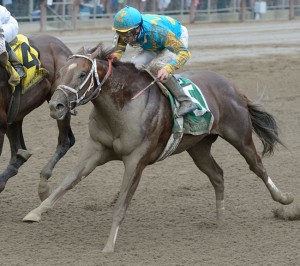 Mr. Z tries again in the Grade II Louisiana Derby at Fair Grounds on Saturday, worth 100 Kentucky Derby qualifying points to the winner. This time, the team of trainer D. Wayne Lukas and owner Zayat Stables takes off the blinkers and changes the jockey to veteran Kent Desormeaux in the hopes of poducing a different result. The changes might work.

In general, connections take off blinkers to encourage a horse to settle, and Mr. Z needs to relax in this speed-loaded race as five other entrants possess enough natural early speed to challenge for the lead. But, his recent efforts with blinkers and gunning for the lead were not poor, and in fact, showed his ability to withstand quick fractions and keep fighting. Only good horses feel the pressure of a fast pace and hang around for the finish.

When Mr. Z finished third by less than a length in the Southwest, he did so after a half in 47 seconds in the slop. At Oaklawn, that is a quick pace for a route distance. The horse that dueled with Mr. Z for the first half faded to fifth and the horse that chased them in third fared even worse. The fact that Mr. Z could not finish the job and put away Far Right remains a concern, but Mr. Z ran hard and deserves credit for the pace battle.

Two starts back in the Smarty Jones, Mr. Z dueled with American Sailor through the early portions, and again the race ended up favoring closers as Far Right benefited from the fast pace and the quirky antics of Mr. Z in the stretch when he lugged out. In addition, Mr. Z was reportedly suffering from a tooth problem in this effort.

Three starts back at Los Alamitos, Mr. Z lost by a neck to Dortmund, widely considered either the best or second-best three-year-old in the nation. Mr. Z has talent. From the second post position, this Malibu Moon colt just needs to piece everything together and he can win. According to a track release, Lukas still believes in his horse.

“He’s probably the most seasoned horse in the field and he deserves to get one of these sooner or later. There’s one in his future, that’s for sure,” Lukas said.

Mr. Z’s biggest threat, besides International Star, comes from the Gulfstream Park invader Stanford. From the rail, jockey Florent Geroux may need to use Stanford to secure position. Because he comes from Gulfstream though and ran second against the highly regarded Materiality in the Islamorada at nine furlongs, this other son of Malibu Moon demands respect. His latest workout for trainer Todd Pletcher looks spectacular, as he drilled a “best out of 30” bullet in :48 seconds flat.

If the pace collapses with Mr. Z and Stanford, then International Star appears destined to take his third straight stakes win from behind. This son of Fusaichi Pegasus won the Grade III LeComte and Grade II Risen Star on this racetrack. A more nitpicking handicapper could point out that he received pace setups for both wins.

The race poses a lot of questions, from Mr. Z’s response to equipment and jockey changes to whether or not International Star is really one of the better colts and the unknown class of Gulfstream invader Stanford. One of the above three horses will prevail on top. Perhaps War Story can sneak in underneath, too. Use Mr. Z, Stanford, and International Star for horizontal wagers. In exotics, either box the same three colts or wheel them with War Story added to the second slot.

Looking at the 2015 Florida Derby Odds and Contenders with Casey