Stellar Wind and Victor Espinoza Take Summertime Oaks: A disappointing fourth after a rough start in the Grade I Kentucky Oaks May 1, Hronis Racing’s Stellar Wind called upon all of her class to eke out a nose victory with Victor Espinoza up in Saturday’s Grade II, $200,000 Summertime Oaks at Santa Anita. Trained by John Sadler, the Virginia-bred daughter of Curlin got a mile and a sixteenth in 1:42.53 and remains unbeaten in three starts at The Great Race Place. 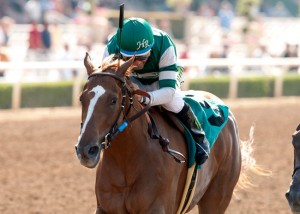 Breaking from the far outside in a field of six three year old fillies, Stellar Wind engaged for the lead around the far turn while three-wide, outside of pacesetter Conquest Curlgirl and Tara’s Tango. Approaching the furlong pole, Stellar Wind and Tara’s Tango, who was ridden by Mike Smith, separated themselves from the field and “Stellar” proved best in a stretch-long thriller.

“Whether the pace was going to be slow or fast…everything changed out of the gate and I was ready for it,” said Espinoza. “…I wanted to see how fast we were going. They slowed it down pretty good, so I kept her closer. That was the best thing because with that pace I couldn’t leave her too much to do.

“I have to give Mike (Smith) a lot of credit because Tara’s Tango was really fighting and he was riding her so hard. But Stellar Wind got the job done and she felt great. I know it’s a little bit hot, but she seemed to come back really well after the wire.”

“She ran very well and she had to give away five pounds today,” said Sadler, in reference to the 123 pounds Stellar Wind carried compared to the 118 assigned to the rest of the field. “With the pace slow, she had a long, extended, wide run…I don’t really have anything planned (for her) yet. I’ll take her down to Del Mar and then we’ll decide if we want to take her out of town or if we want to run her on the grass.”

The Summertime Oaks represented Stellar Wind’s third overall graded stakes win and it was her fourth win from six overall starts. With the winner’s share of $120,000, she increased her earnings to $493,200.

“I think we’d like to keep her on dirt for now,” said Kosta Hronis, when asked what might be next for his star filly. “If we stay home here at Del Mar, we’d probably have to switch over to the grass. If we keep her on dirt, we might go to Saratoga.”

“He (Espinoza) had a horse that was more seasoned, who’s been around two turns several times and it was Tara’s Tango’s first time around two turns,” said Smith. “All that happened was that she got a little tired at the end. If that doesn’t happen, I think I get it.”