The Santa Anita Derby takes place tomorrow April 6, 2013 at Santa Anita Park in Arcadia, California. The $750,000 Grade I race is run on a 1 1/8 mile dirt track and is set with eight strong contenders.

Fan favorite Flashback, with 9-5 odds, will break from post position #1 with Garrett Gomez aboard. In our opinion, jockey Julien Laparoux was simply bad news for the powerful grey horse. Bob Baffert who has also entered Power Broker and Super Ninety Nine trains Flashback. Bob Baffert expressed that he thinks Flashback will be more relaxed in the Santa Anita Derby, unlike the San Felipe Stakes with Julien Laparoux aboard.

Kevin Krigger stated, “I don’t think Flashback will be head-and-head with me going into the turn or around the turn, and I think that will give us a fairer chance at having a more relaxed scenario.”

The sad news is Hear The Ghost, who was leading the board with 50 points, was scratched due to a slight injury to his front leg. Hear The Ghost was the second favorite for the 2013 Santa Anita Derby with 5-2 odds. 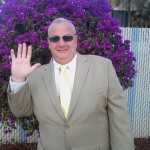 Vito Salatino, expert Handicapper and friend of Lady and The Track.

We were indecisive this week picking horses for the 2013 Santa Anita Derby so we consulted with expert handicapper and friend of Lady and The Track, Mr. Vito Salatino.

Vito Salatino stated, “Bob Baffert has won six Santa Anita Derby’s and has three in tomorrow’s race including Flashback, Super Ninety Nine, and Power Broker. Super Ninety Nine will shoot out of the gate and control the tempo. With Flashback drawing the rail it gives Gomez the opportunity to get him relaxed and just wait to make a move. Flashback is definitely the better of all in here. I Like Flashback to win and go on to Kentucky.”

Vito added, “I also like Goldencents with Jockey Krigger to finish second. Rounding out the Trifecta, my pick is Baffert’s Power Broker to place third.”

Thanks Vito! Lady and The Track would like to wish Hear The Ghost a speedy recovery and wish all the contenders in the 2013 Santa Anita Derby the best of luck. Good Luck! Safe Run! 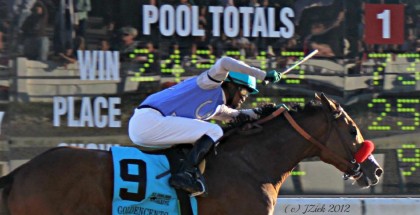 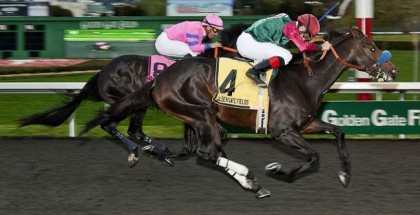