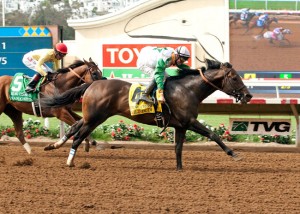 This year, the Pat O’Brien has a small but deep field. With only five horses entered, the race will be even tougher to handicap and bet for those interested in doing so. Bob Baffert has one horse in this year’s race, Turnover. The gelded son of Big Brown out of a Lemon Drop Kid mare looks to grab up a third win in what would be six starts and his first graded stakes win. He will also be making his graded stakes debut in the Grade II Pat O’Brien. His last start came in an allowance optional claiming race on July 19 at Del Mar at a distance of 6-1/2 furlongs. The gelding sat in fifth before barely improving to finish third of six. He had a rough and wide race and just barely missed second. He may be a threat to this race if he gets something at which to run.

Peter Miller sends out his consistent gelding Appealing Tale after a close defeat in the Grade II San Diego Handicap at Del Mar. The son of Tale of the Cat and an Unbridled’s Song mare is now dialing back to seven furlongs after having been competing in two-turn races. Appealing Tale looks to grab his first graded stakes win and earn his spot in the Breeder’ Cup Sprint at Keeneland this October. Appealing Tale likes to run on or near the lead, and after nearly wiring the 8-1/2-furlong San Diego Handicap, he may very well be able to take the Pat O’Brien in similar style.

Jerry Hollendorfer sends out the Florida-bred Wild Dude, a son of Florida stallion Wildcat Heir. Wild Dude is coming in off a win in the Bing Crosby (GI) at upset odds of 11-1 over top sprinter Masochistic. With that win, the horse has already secured his spot in the Breeders’ Cup Sprint at Keeneland this fall. Hollendorfer does not send out horses unless he believes they can win. Wild Dude is a multiple graded stakes winner and seems to be getting better the older he gets. He has not had impressive workouts, but if the horse is in racing shape, Hollendorfer is more interested in keeping his horse that way than getting him into racing shape.

Indexical comes into the race for trainer Ben Cecil off a 6-1/2-furlong allowance win over the Del Mar track. In that race, he defeated Turnover, afoe he will be facing in the Pat O’Brien. A product of Latent Heat and a Regal Classic mare, the ridgling looks to get back into the winner’s circle a second straight time and grab up his first graded stakes win. Indexical likes to be on or near the lead and will show speed to get there.

Peter Eurton sends out his grey son of Flatter, a top New York stallion, Kobe’s Back. After grabbing the Grade III Commonwealth Stakes at Keeneland in April, the colt finished sixth in the Met Mile and third in the Bing Crosby. There should be enough speed in this race for the colt to close into, but does he have the talent to do so? He has been having consistent maintenance works at Del Mar since the Bing Crosby and looks to get back into the winner’s circle and then head towards the Breeders’ Cup Sprint. 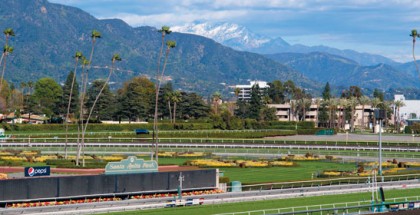