Victor Espinoza in ‘Dancing with the Stars’ This Week

Victor Espinoza in ‘Dancing with the Stars’ This Week: Meet Team Espinoff! Triple Crown-winning jockey Victor Espinoza and Karina Smirnoff take the stage in Season 21 of the long-running ABC series Dancing with the Stars. The first new episode airs tomorrow night at 8 p.m. EST. Then on Tuesday, the show runs for two hours starting at 9 p.m. EST. No celebrities are going to be eliminated during the first week. 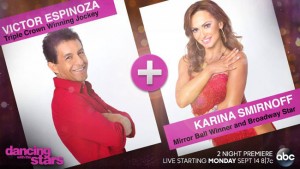 Dancing with the Stars debuted in 2005. Celebrities come on the show and are paired with a professional dancer, which means Smirnoff is Espinoza’s professional. The current hosts are Tom Bergeron from America’s Funniest Home Videos and former finalist Erin Andrews.

If fans worry Espinoza lacks experience dancing in front of a national audience, Smirnoff holds plenty. According to the official website for the series, Smirnoff competed in Dancing with the Stars three times already. She fell in love with ballroom dancing at the young age of nine. Their first dance song for the season premiere will be “G.D.F.R.” by Flo Rida.

Espinoza, or the “Luckiest Mexican on Earth,” consistently refers to the event on his Facebook Page. He posted on Sept. 9 and wrote that practice took “another six hours.” The same day, he uploaded a picture with fellow contestants actor Gary Busey and cookbook author Paula Deen.

Three days later, a short promotional video appeared. Espinoza dressed up in his Zayat Stables jockey silks and said, “I’m Victor Espinoza, a Triple Crown winner, and I’m here to win.” Later in the morning, he ate ribs in a status update and wrote “Dancing sure makes you hungry.”

Pictures of Smirnoff are present on Espinoza’s Page too. On Sept. 6, there is one of Smirnoff fist-bumping a little statue of Espinoza wearing the same Zayat colors. The day before, she holds up Espinoza’s leg with one arm and wraps her arm around him with another one. Smirnoff and Espinoza look like they enjoy each other’s company, if nothing else.

For those inclined to wager, former Backstreet Boys member Nick Carter is the favorite at 11/4. Spy Kids star Alexa PenaVega rates as the second choice at 3/1. As for Espinoza and Smirnoff, their 16/1 odds offer some value, for those knowledgeable about how to place money on this.

While gambling on the stars is tricky, fans can vote for Team Smirnoff. Although there are no eliminations for the first two episodes, the FAQ suggests that voting begins in Week 1. Support Espinoza through ABC.com, Facebook or a special phone number at 1-855-234-5613. If voting on the ABC website, a username is required. Family members in the same house can vote using a different username. The polls remain open during the show and an hour after the conclusion.

No matter the outcome, most racing fans are thankful for the exposure of the sport to a wider audience, and Espinoza seems enthusiastic on the experience. Only a guest appearance from American Pharoah could make this a greater event for horse racing fanatics. Considering his calmness, the colt would likely stand patiently as Espinoza dances. If Espinoza advances far, horse racing will greatly benefit, and all involved with the industry wish for such a scenario.

Embellish the Lace to Decorate Resume in Cotillion