Victor Espinoza Starts Slow in Week 1 ‘Dancing with the Stars’

Victor Espinoza Starts Slow in Week 1 ‘Dancing with the Stars’: Relax racing fans! No eliminations are slated this week on Dancing with the Stars, which means Triple Crown-winning jockey Victor Espinoza and his professional dance partner Karina Smirnoff can use the first week as a building experience. Judging from the scores given to them by judges Carrie Ann Inaba, Bruno Tonioli and Julianne Hough, Team Smirnoff will need to pick up the pace. 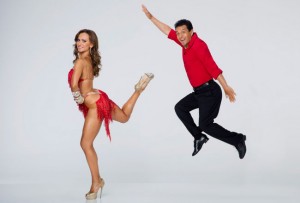 Triple Crown-winning jockey Victor Espinoza and his professional dance partner Karina Smirnoff can use the first week of Dancing with the Stars as a building experience.
Photo: Victor Espinoza facebook

In Episode 1, Espinoza started out fast as he rode a horse underneath the backdrop of a racetrack before they started the real dancing. The crowd cheered as Smirnoff appeared with two other beautiful ladies, and Espinoza jumped in the center wearing the Zayat Stables silks.

He then began to gyrate his hips, while Smirnoff slid underneath Espinoza and finally linked up with him as they began the dance. At one point, Smirnoff bent over and the jockey hovered his hand around her behind (anyone that watched the YouTube video will see this as the preview).

The party-ish rap music continued, and Team Smirnoff continued to the performance. From a non-dancer’s perspective, their moves looked highly suggestive although entertaining. They shaked their hips and spun around their arms a bit more. The two extra ladies reappeared in the background and danced along with them.

Espinoza and Smirnoff spun each other around a few times and the act ended. The crowd applauded the duo, and they came towards host Tom Bergeron who introduced the judges. Each of them said something positive. Hough commented on their hip movements. Tonioli also mentioned the grinding action, but complained about the lack of salsa. Inaba also sounded disappointed on the salsa deficiency. She gave them a bit of credit anyway.

After standing on a platform and talking with Erin Andrews for a minute, the judges revealed their scores. Each one of them gave a five, making their score 15 out of 30. At first glance, the 15 appeared low. Smirnoff offered a couple of encouraging words though, and Andrews noted a couple of “boos” in the crowd. Judging by the average score, they remain in the mix for now.

Although a second episode aired tonight, it only involved a “recap of dances from the first episode of the season” and “interviews and rehearsal footage” according to TV Guide.

Espinoza will likely keep posting status updates during his run on the show on Facebook. Smirnoff runs her own Facebook Page as well, and fans of Victor will find her status updates equally entertaining. Tune in next week to ABC on Monday at 8 p.m. EST and Tuesday at 9 p.m. EST to see if they survive the first round of eliminations.

To make sure they stay in the competition, keep voting for them. Either log on to the official ABC website, go on Facebook or simply call the phone number 1-855-234-5613 at the appropriate time (during the show and one hour after each episode ends).

Night Two of Victor & Karina Dancing with the Stars:

Embellish the Lace to Decorate Resume in Cotillion

Cotillion Stakes & Penn Derby at Parx Offers Fun For All