Breeders’ Cup Chat: Is Beholder better than American Pharoah? Champion colt American Pharoah won the Horse of the Year Eclipse Award already, according to many fans. While a debate only seems fair if the older mare Beholder wins the Breeders’ Cup Classic (GI) later this month, it is too late for her to secure the industry’s highest honor. Which horse is more accomplished though? Does one of them possess more talent, or is it too hard to tell at this point? 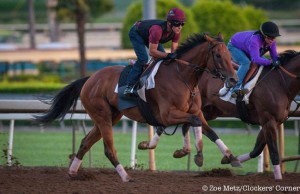 Under cover of darkness, the two-time Eclipse Award winner, who comes off her third consecutive win in the Grade I, 1 1/16 miles Zenyatta Stakes Sept. 26, galloped one and a half times around before returning to the Mandella barn and a much-needed bath. Photo: Zoe Metz/Clockers Corner

From an accomplishments standpoint, Beholder did a lot more than people realize. She won nine different Grade I events. Nine! Two of them were Breeders’ Cup events. The old argument of “not all graded stakes races mean the same, even if they are exactly the same grade” applies. Yet, think about Zenyatta’s career and how she won Horse of the Year in 2010. The fans counted up her Grade I wins and claimed she accomplished more than Blame. If that is standard logic, then use it here as well.

Currently, American Pharoah holds seven Grade I victories, granted in a much shorter time span. Of course, three of those came in the prestigious Triple Crown series for three-year-old horses, which the industry holds in high regard. When a horse wins the Kentucky Derby (GI), their name is etched in racing history. Capturing the Triple Crown means becoming an immortal. With all respect to Beholder, the casual racing fan cannot name half of her Grade I wins.

In terms of open company wins, with no age or gender restriction, Beholder leads with one Pacific Classic (GI) victory at Del Mar, compared to zero unrestricted wins for American Pharoah. In no way does this number suggest American Pharoah cannot win against older horses. Rather, it is a plain fact. American Pharoah lacks a win versus older stakes horses, while Beholder owns one.

On the Beyer Speed Figure scale, Beholder earned the high number at 114. Looking at their past performances, American Pharoah ran faster Beyer Speed Figures than Beholder more often. The star mare simply holds the best one. In Beholder’s other races, she basically sandbagged speed handicappers into thinking she was slower. Sometimes horses can win by much larger margins. 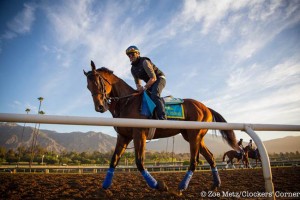 Superstar mare Beholder and Triple Crown Champion American Pharoah (pictured above with George Alvarez) continue to prepare at Santa Anita for what looms an epic showdown in the $5 million Breeders’ Cup Classic on Oct. 31 at Keeneland. Photo: Zoe Metz/Clockers Corner

American Pharoah must be given credit for consistency. Since his Del Mar Futurity (GI) win last fall, he reeled off nine consecutive Beyer Speed Figures at 100 or above. His highest number came at the Haskell Invitational (GI) at Monmouth Park, where he earned a 109. Someone get out the calculator to figure out how many lengths American Pharoah needs to make up on Beholder.

Three-year-old colts are not quite done developing physically, and if American Pharoah had more time, he could turn into a horse that reels off Beyer Speed Figures in the 115 range. His last chance will come in the Breeders’ Cup Classic.

Visually, they both look good in their wins and losses. American Pharoah ran a superb race in the Travers (GI), and only got passed in the lane by Keen Ice because of the hot tempo. Each one of his races this year appear devastatingly brilliant, without analyzing numbers or pace figures. Beholder enjoys blowing away the competition too, as she won the Pacific Classic by over eight lengths.

Picking one over the other in the Breeders’ Cup Classic will not come as an easy task for anyone. If pressed to argue for which horse is ahead right now, then Beholder holds a slim margin because her Pacific Classic victory gave the high Beyer Speed Figure number and an important win against older horses. American Pharoah still can romp in the Classic though, and ride off into the sunset with the nation’s Triple Crown and most difficult Grade I for older horses. Just flip a coin and decide.

For more information on the Breeders’ Cup at Keeneland visit breederscup.com. 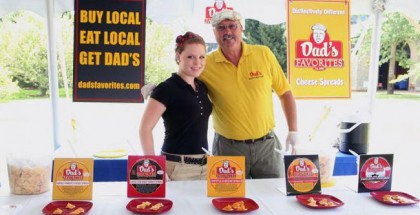 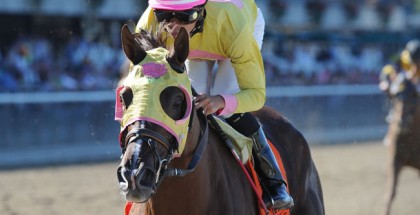