Although Hopeful Stakes (GI) winner Ralis was heavily favored, it was Greenpointcrusader (Bernardini – Ava Knowsthecode, by Cryptoclearance) who emerged wearing the laurels of the Champagne Stakes (GI) at Belmont. The full brother to successful racehorse and new stallion Algorithms broke his maiden fairly impressively during the Saratoga meet and made his stakes debut in the Champagne. Greenpointcrusader stumbled and was bumped as he broke from post position 2, but he managed to comfortably settle in sixth in the field of eight. Moving away from the inside towards the final turn, the dark bay colt made a wide bid and escaped the field to take the race by a dominating 4-1/2 lengths.

The highly favored Exaggerator was upset in the Claiborne Breeders’ Futurity by a new kid on the block. Brody’s Cause (Giant’s Causeway – Sweet Breanna, by Sahm) entered his first graded stakes race with a maiden victory in fast-closing style under the twin spires of Churchill Downs, and he repeated that effort in taking down Exaggerator. Unhurried in the early stages of the race as he ran along in tenth, Brody’s Cause didn’t start his run until the final turn. However, he unleashed a powerful move on the outside and ran down the favored colt to take both the Futurity and a right to a run in the Breeders’ Cup Juvenile by a length.

Tepin (Bernstein – Life Happened, by Stravinsky) proved her superiority once again with her runaway victory in Keeneland’s First Lady Stakes (GI). With four wins and two seconds on the year, of which five races were graded stakes events, Tepin is primed to make a huge run on Breeders’ Cup weekend. In the First Lady, the four-year-old bay filly stayed close to leader Cara Marie but easily blew by her around the turn. By the time she hit the wire, Tepin was seven lengths in front of her closest challenger, easily claiming her fourth graded stakes win.

As usual, a kitten ruled on the turf in this year’s Flower Bowl Stakes (GI) at Belmont. Stephanie’s Kitten (Kitten’s Joy – Unfold the Rose, by Catienus) is a six-year-old turf specialist who claims only four off-the-board finishes in her twenty-four lifetime starts, and some of her most impressive victories have come in last year’s Flower Bowl, the Just a Game Stakes (GI), and the Breeders’ Cup Juvenile Fillies Turf (GI). Breaking well in the field of eight, Stephanie’s Kitten patiently stalked the front-runners before making a run at Danza Cavallo down the stretch. With her 1-1/2-length victory, Stephanie’s Kitten assured her place in the Breeders’ Cup Filly and Mare Turf.

Scat Daddy juveniles are making waves in racing, and his daughter Nickname (Scat Daddy – Nina Fever, by Borrego) further cemented his rising dominance as a stallion with her win in Belmont’s classic Frizette Stakes (GI) for two-year-old fillies. It took the dark bay filly two tries to break her maiden over the historic Saratoga oval, but once she did so, it was apparent that her best success was ahead of her. Racing over a sloppy track, Nickname settled in second behind She’s All Ready and simply stalked that foe before leaving the field behind by 3-1/2 lengths at the finish line.

Tonalist (Tapit – Settling Mist, by Pleasant Colony) delivered in a highly anticipated edition of the Jockey Club Gold Cup (GI). The impressive four-year-old colt has finished worse than third only twice in his fourteen starts, and he claims wins in last year’s Belmont Stakes (GI) and Jockey Club Gold Cup. Over a sloppy track for this year’s edition of the Belmont classic, Tonalist settled at the back of the small field of six and bided his time as Constitution set the early fractions. After a mile, Tonalist had made his way into second, and down the stretch he was simply running away with the race, eventually landing a 4-3/4-length lead at the finish.

Wild Dude (Wildcat Heir – Courtly Choice, by Doneraile Court) has amassed quite the résumé as a top sprinter in the nation, and he further fortified his position with a gutsy win in the Santa Anita Sprint Championship (GI). With previous victories in the Palos Verdes Stakes (GII), San Carlos Stakes (GII), and Bing Crosby Stakes (GI), the five-year-old horse trained by Jerry Hollendorfer seems primed to take on top company in the Breeders’ Cup Sprint. Running as the second favorite to Masochistic, Wild Dude ran in fourth in the field of five and made his move in the final sixteenth as he wore down the leaders to win by a neck.

Grand Arch (Arch – Bacinella, by El Gran Senor) snatched up his first lifetime Grade I victory with his determined win in the Shadwell Turf Mile (GI) at Keeneland. Although the Shadwell is his first Grade I win, the six-year-old gelding is no stranger to the higher echelons of racing with two other graded stakes wins and a handful of runner-up results. As the slight favorite over Arlington Million (GI) winner The Pizza Man, Grand Arch broke well and ran along in fourth in the early stages of the race. Along the turn, he moved off of the rail to make his move, and down the stretch he was able to hold off challenges by The Pizza Man and Tourist to win by a head.

Tepin Back Against Own Gender in Endeavour... February 11, 2016 | Reinier Macatangay 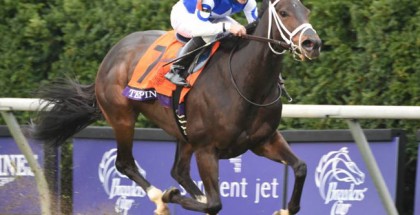