Two-Year-Olds Thoroughbreds to Watch: Team Picks 6- With Keeneland’s open gates, Belmont’s classic races, and Santa Anita’s typical great racing, horse racing is certainly booming at the moment. Of course, such spectacular race meets are full of promising juveniles, so here are a couple of Reinier’s and Jessica’s favorite two-year-olds! 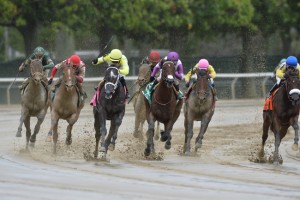 Sunny Ridge (pink saddle cloth, yellow cap) ran deceptively well in the Champagne Stakes (GI) on October 3, 2015 at Belmont Park. Despite losing to Greenpointcrusader, he finished second and out-dueled the other three pace horses who struggled towards the end. Expect to receive value if backing this one next time.
Photo: Joe Labozzetta, Coglianese/NYRA

Sunny Ridge
Holy Bull – Lignum Vitae, by Songandaprayer
Reinier’s One to Watch
Hey, a New Jersey-bred! Does it matter? The sire is a familiar name, both from a racing career and breeding standpoint. Holy Bull sired 2005 Kentucky Derby (GI) champion Giacomo, among others. Sunny Ridge ran deceptively well in the Champagne Stakes (GI) last weekend at Belmont Park. Despite losing to Greenpointcrusader, he finished second and out-dueled the other three pace horses who struggled towards the end. Expect to receive value if backing this one next time.

Inheritance
Tapit – Silver Wolf, by Silver Deputy
Jessica’s One to Watch
Hailing from the female family of the good miler Corinthian, Inheritance may be one to watch at mile distances as well. Although the gray filly wasn’t able to overcome some trouble in her first outing, she easily managed to win her second. Inheritance immediately went to the front to set a comfortable pace in the mile-long maiden event at Belmont, and she easily expanded her lead to a gaping sixteen lengths by the wire. Of course, open-length romps are not particularly rare, but the easy manner in which Inheritance achieved hers seems to provide some semblance of running ability and thus lands her on my list of juveniles to watch.

Steidle
Petionville – Storm Dixie, by Catienus
Reinier’s Other One to Watch
Named after a teenage girl who suffers from Charcot-Marie-Tooth, the filly Steidle could bring attention to the disorder if she manages to ever reach the stakes ranks. Right now, this sibling to Princess of Sylmar lacks even a start, but she has posted two official workouts over the past few weeks. One last interesting thing about Steidle is her sire, Petionville, who is almost never seen in the past performances for major racetracks anymore. With a proven dam, maybe this one can keep Petionville’s name going.

Gift Box
Twirling Candy – Special Me, by Unbridled’s Song
Jessica’s Other One to Watch
Despite a rough run in his maiden victory, Gift Box proved up to the challenge to clinch his first win. After being jostled at the start, running wide throughout, and being bumped down the stretch of the 1-1/16-mile off-the-turf event, the gray colt gamely nailed rival Matt King Cole at the wire to win by a nose. It also provides some confidence that his jockey, Javier Castellano, didn’t seem too pressed in urging his mount down to the wire as one would expect in such a dire stretch run and instead relatively calmly persuaded him with his hands and the whip. This one looks to improve as the races lengthen. 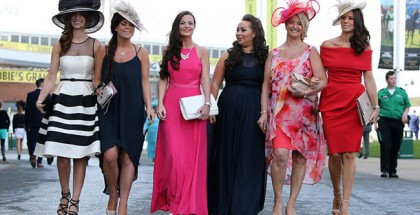 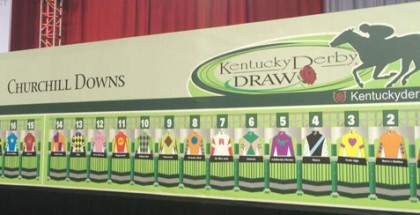 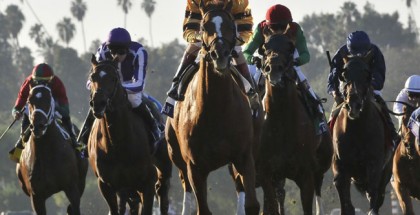