Santa Anita Park Picks and Plays October 10, 2015: The Breeders’ Cup Challenge Series ended last weekend, but the races never stop. This weekend, there are some great races for two-year-olds out at Santa Anita, including the Zuma Beach Stakes and the Surfer Girl Stakes. This weekend, we are handicapping the last six races of Saturday’s Santa Anita card and making some plays for fans to utilize. 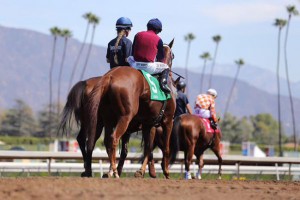 This weekend, there are some great races for two-year-olds out at Santa Anita, including the Zuma Beach Stakes and the Surfer Girl Stakes. Photo: @santaanitapark

Zuma Beach Stakes
Race #5: 7, 9, 4
The logical choice here is I’malreadythere, a horse who got a decent third place in the Del Mar Juvenile Turf Stakes behind Hollywood Don, who ran a terrific race next out in the FrontRunner Stakes (GI). Although Dressed in Hermes is still a non-winner, he has faced good prospects in his two starts. In his last race he showed heart since he never gave up against Hollywood Don. Freedom Hill should appreciate the stretch out to one mile. Talamo stays in the irons which is a good sign.

Race #6: 2, 3
Family Code is the class of the field and the likely winner of this race. He has been facing tougher competition, and he is the fastest horse of the field. However, he has had some problems at the start, an advantage for the rest of the field that can’t be surrendered at any level. The Louisiana-bred Courageous Dave was a bit slow at the start in his debut, but he was able to run just off the leaders and pass them comfortably in the stretch. He beat a modest field, but the speed figures were brilliant, and he looked good visually.

Surfer Girl Stakes
Race #7: 5, 7
Jakaby Jade had an ideal trip in her Del Mar Juvenile Fillies Turf Stakes victory. However, she showed some talent, and, in my opinion, the fillies who faced her in that race won’t turn the tables this time. I’m only trying to beat her with Lucky Folie, a filly who is facing her for the first time. Folie has some turf pedigree, so the switch in surface should not be an issue. She’s moving up in class, but she looks to have the quality to beat this field.

Race#8: 6, 12, 5
Dr. Dorr has the best workouts of the field, and the Martin Garcia/Bob Baffert combo always does very well with first-time starters. Diplodocus is a horse with a pedigree for sprint races, so we’ll likely see him in the mix in the early stages. Iron Rob is improving his numbers with each race and looks ready to break his maiden.

Race #9: 10, 5
Avanti Bello faced tougher horses in his last race and finished with a very good third place. Like most Include progeny, he will appreciate the 1-1/16-mile distance. Brimstoned looked like quite the serious horse in the recent Del Mar meeting, winning two races by several lengths. He’s moving up in class, but we must keep playing this horse until someone stops him.

Race #10: 10
In general, people don’t like to play a single in the finale, but this time I’m not trying to beat Turnover, a horse who looks to be one step ahead of this field. He is working very well and also has a good post position. I’m definitely using him as a single.