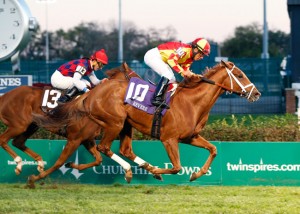 Ridden by Paco Lopez, Isabella Sings ran 1 1/16 miles in 1:44.74 over a Matt Winn Turf Course rated “good” to collect the first graded stakes win of her 11-race career. The Mrs. Revere is North America’s final graded stakes of the year for 3-year-old fillies on grass turf this year, and has attracted a full field of 14 for each of the last three years.

“She had been training really well and coming into it in good shape and we felt like she had a fighting chance in what appeared to be a deep and competitive field,” Pletcher said.

Isabella Sings led the cast of 14 fillies through fractions of :23.50, :48.07 and 1:13.41. She had a two-length lead over Celestine and Cara Marie down the backstretch, shifted wide into the turn with Lopez confidently looking back over his right shoulder and remained clear in the stretch to hold off a rallying Rainha Da Bateria, who had one horse beat midway through the race.

“She can be kind of a headstrong filly and Paco was able to kind of coax her along a bit and get her to settle,” Pletcher said. “The first quarter was solid, but then they were able to talk her out of it and get a kind second quarter. It looked like it was game on from there. I was hoping she could continue on.”

The winner’s share of the purse pushed Isabella Sings’ earnings to $303,950 from four wins and three seconds in 11 starts.

Isabella Springs, a chestnut daughter of Eskendereya out of the Lomitas (GB) mare Isobel Baillie (GB), was bred in Kentucky by her owners.

“She’ll get a break at Siena Farm,” Pletcher said. “She’ll go over there and get a bit of a freshening, which we already had planned win, lose or draw. She’ll get a little bit of a break and she’s the kind of filly that should get better as a 4-year-old. She’s put together a few solid races this year and with her pedigree she should have hopefully her best year next year.”

The Mrs. Revere is named in honor of Mrs. Revere, an accomplished Churchill Downs fan favorite in the mid-1980s. Mrs. Revere won 12 races in 28 starts, finished second seven times and earned $429,545 for Hall of Fame trainer Bill Mott. Her six wins in a dozen starts at Churchill Downs included stakes triumphs in the Regret, Dogwood and Edgewood in 1984 and the Kentucky Cardinal in 1985. She was owned by Drs. David Richardson and Hiram Polk, who have provided the winner’s trophy for the Mrs. Revere in each year of its existence.