Mor Spirit a Standout in Los Alamitos Futurity: Continuing the path to the Kentucky Derby (GI) in May, the Los Alamitos Futurity on Saturday offers qualifying points to the first four finishers. Mor Spirit, a Bob Baffert-trained entrant, will search to capture those 10 points for winning. He already owns four points. 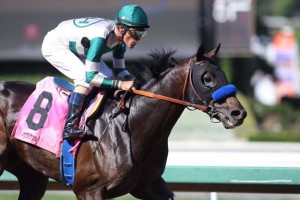 Mor Spirit is looking to earn ten points on the Kentucky Derby Trail in the Los Alamitos Futurity on Saturday, Dec. 19, 2015. The Bob Baffert trainee has already earned four points on the trail. Photo: Benoit

Owned by Michael Lund Petersen, Mor Spirit owns one maiden win out of three starts. Some handicappers will prefer the other Baffert-trained horse in this race, Toews On Ice, who seeks his fourth win in a row after taking the Bob Hope (GIII) at Del Mar. A couple of reasons give the edge to Mor Spirit though.

For one, Baffert wheeled Mor Spirit into a route after finishing second in his career debut. He already trusted Mor Spirit at longer distances right off the bat, while Toews On Ice makes his two-turn debut this weekend.

Toews On Ice broke his maiden by over seven lengths, at Los Alamitos, but it came in a sprint. Mor Spirit earned his maiden win in a two-turn route at Santa Anita Park. The Futurity is run around two turns at Los Alamitos.

Furthermore, Baffert thought highly enough of Mor Spirit to send him across the country to compete at Churchill Downs in the Kentucky Jockey Club (GII), where he finished second to Airoforce with only two previous starts under his belt. Jim Barnes, an assistant trainer for Baffert, commented on Mor Spirit’s loss in a track press release.

“We had to kind of use him from our outside post to get to the position we wanted him to be early, but he ran very well,” Barnes explained.

Martin Garcia rode Mor Spirit in Kentucky and agreed on the outside post affecting his run.

“The post position (9) made me use my horse a little bit more than I’m supposed to,” Garcia said.

Toews On Ice, who made his career debut in July and ran four more times since then, never left Southern California or competed in a route. Yet, despite the slower progress, Toews On Ice might be able to steal the race if his stablemate fails to fire.

The son of Archarcharch starts from post position four, while Mor Spirit begins to the right of him. Expect jockey Martin Garcia to send Toews On Ice hard early, and Mor Spirit’s pilot Gary Stevens to sit around third or fourth.

The rest of the field will need to improve.

Some attention has been focused on the rail-horse Urlacher. While nothing in his form stands out, young horses are able to change quickly. Godolphin Racing chooses not to waste time in another maiden race with this son of Discreet Cat and the A.P. Indy mare Perceive. He could break his maiden in this stakes race with a significant jump.

Perhaps Hollywood Don, who starts from the third post position, can improve off his third-place finish in the FrontRunner (GI) at Santa Anita. He also competed in four different turf races, which makes his record difficult to evaluate.

In post six, Sorryaboutnothing makes his stakes debut after winning via disqualification over Urlacher at Del Mar. He will attract support based on his connections. They include trainer Doug O’Neil and Fog City Stable, along with jockey Rafael Bejarano.

Finding value in any Baffert-trained horse is often difficult. The man just won the Triple Crown this year. His horses must be considered in this race though, with Mor Spirit the likelier of the pair to win. Key Mor Spirit on top and mix the other four mentioned opponents underneath. In horizontals, use Mor Spirit and Toews On Ice.

With a late-afternoon start of 4 p.m. PT, there is plenty of time to prepare. The Futurity will need to find a new home next year as Los Alamitos cuts their more expensive stakes races. Could this be the last edition forever?