Social Media Accounts Keep Horse Racing Fans Involved: Twenty years ago, no one knew horse racing connections would own social media accounts. Now in 2016, those wishing to send a message to Shadwell Stable, who are campaigning a legitimate Kentucky Derby 142 candidate in Mohaymen, can bypass the email method by leaving a comment on the Shadwell Stable Facebook or Twitter. 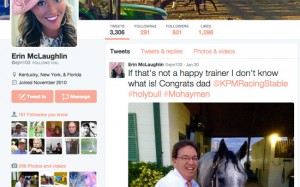 Does posting consistent updates and interacting on social media make a difference to fans and how they perceive the horses? Bailey Gallison, an official racing ambassador at Santa Anita Park, believes it helps.

“I will certainly follow along more …. I’ll cheer for a stable that puts effort in for fans,” she wrote.

One operation that put an extraordinary amount of effort into their social media accounts is Conquest Stables, owners of Holy Bull Stakes (GII) contender Conquest Big E. In addition to giving out standard news reports, they offer unique commentary and photoshopped pictures of their horses in crazy environments.

For example, check out the recent post on the maiden Conquest City Girl last week.

“IF SHE CAN MAKE IT HERE, SHE’LL MAKE IT ANYWHERE! Conquest City Girl is ready to run through Gulfstream Park like she owns the place! She’s all set to bring her big city swagger to Florida on Sunday (January 31st) in Race 8 at 4:05 PM ET from Post 10. Speaking of swagger, she’ll be joined by none other than Mike Smith!”

Below the status update is a picture of Conquest City Girl running through a city with streets made of grass. In general, Conquest horses are well-bred and talented, which makes them easy to love as well. When asked about the unique Facebook Page, the social media manager gave an old quotation from one of the co-owners Ernie Semersky.

“Conquest was a really an idea of making a conquest of the way that things are normally done,” he said in the video.

Songbird might come across as a perfect model for her comment. She performed better than any 2-year-old horse last year and receives plenty of love from jockey Mike Smith, trainer Jerry Hollendorfer and Fox Hill Farm. To meet the third prerequisite, Fox Hill Farm posts a mixture of news articles and original reports or photos.

On Jan. 27, this status update about Songbird was posted on the Fox Hill Farm Facebook Page.

“Jerry Hollendorfer just called me and said Songbird had a great somewhat effortless work going 7 furlongs. She displayed her talent by going 1:26.3 and galloped out easily in 1:40. Mike Smith and Jerry couldn’t be happier as she is getting ready to run in the next couple weeks. A+.”

Wow. That is fairly detailed. While they lack the fancy photoshopping found in the Conquest Stables Facebook, Fox Hill makes up for this with informative posts, workout videos and more. Matt Dinerman, racecaller at Emerald Downs, feels the kind of detail found on Conquest Stables and Fox Hill Farm social media accounts is important.

He pointed out how the fans “feel a personal connection when the owners interact with (them).”

Steve and Carolyn Coburn are two owners who interact with fans on their Facebook Page representing Hope’s Love, a full sister to the famous California Chrome. Besides the usual array of pictures and workout reports, they posted video of them at a restaurant naming Hope’s Love by picking names out of a hat.

The Coburns posted the video to prove how co-owner Perry Martin had no involvement in the name of their filly, which shows how social media can also give opportunities for fans to read the direct truth from owners.

Every owner, or ownership group, provides something different on their social media accounts. It is strange to think about the racing world without Internet today. This article did not even dive into the world of horse-specific accounts (ex. Juba’s Twitter), where the equine stars type their own status updates. Imagine that 20 years ago.