Songbird Remains Unbeatable in Santa Ysabel: Superstar filly Songbird remained unbeaten Saturday at Santa Anita as she cruised under a statuesque Mike Smith to a 3 ¾ length win in the Grade III, $100,000 Santa Ysabel Stakes. Trained by Jerry Hollendorfer and owned by Rick Porter’s Fox Hill Farms, Inc., the 3-year-old daughter of Medaglia d’Oro covered a mile and a sixteenth in 1:43.02 and, according to Hollendorfer, now has her sights set on the Grade I, $400,000 Santa Anita Oaks on April 9. 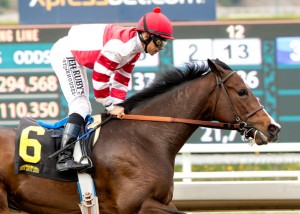 “I don’t take anything for granted,” said Hollendorfer. “I’m very grateful to win a race like this. I didn’t want to work her into the (Santa Anita) Oaks. I wanted to have a prep and we got the prep today.

“The Santa Anita Oaks would be next and if she looks real good, we’ll try to think about the Kentucky Oaks (Grade I, 1 1/8 miles, May 6). I don’t like to think too far ahead but that’s our long term goal.”

Breaking from post positon five, Songbird was hustled to the lead by Smith, who got early pressure from longshots Jade Princess and Not Now Carolyn, but began to inch clear leaving the half mile pole and seemed to hit another gear around the far turn.

“I could have let someone go to the lead today, but I didn’t because it was there and it was that easy for her,” said Smith, who has ridden her in all of her races. “It was incredible. I got a bit star-struck when I looked over at the (Infield) big screen to see if I needed to do a little bit of work and I was just in awe of how easily she was doing things, again. I couldn’t seem to take my eyes off the big screen. I told myself, ‘I better get back to it and stay on.’ She was really on her game.”

“It’s such a fantastic feeling when you get a horse like this,” said owner Rick Porter by telephone from Kentucky. “I’ve had some good ones, but I’m not sure I’ve ever had one this good.”

Ridden by Mario Gutierrez, Land Over Sea rallied well for the place, finishing 3 ½ lengths in front of Mokat. The second choice in the tote at 13-1, Land Over Sea paid $3.80 and $2.60. 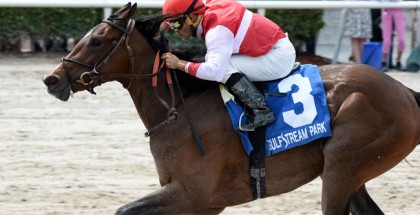 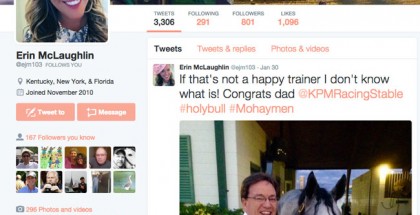 Songbird a Near Lock in Cotillion Stakes September 22, 2016 | Reinier Macatangay