Donworth a Big Threat in Big ‘Cap: Bettors might dismiss Donworth in the $1 million Santa Anita Handicap (GI) on Saturday. After all, he faded to third in the San Antonio (GII) and the race this weekend will be one furlong longer. He deserves another look though. 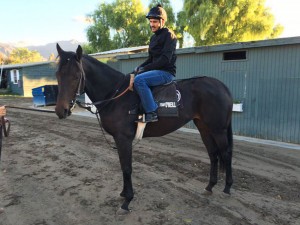 Trained by Doug O’Neil and owned by Reddam Racing, Donworth’s new connections spent $550,000 last fall at a Keeneland auction to buy the colt. With that kind of money comes expectations.

Donworth ran well enough in his first start off the bench last month in the San Antonio. He simply faded a bit, and sometimes the scenario where a horse sets the pace and becomes tired gives handicappers the wrong idea of distance limitations.

His 4-year-old stakes debut came after a long break and promise shown in his initial races last year.

One year ago, Donworth had a crazy-trip maiden win at Gulfstream Park. His win was noticed by more than a few racing fans, and some even called him a “monster” after the race. It is far easier for handicappers to notice a troubled trip when it involves a horse needing to find room rather than pace issues, and therefore Donworth received attention for the victory.

Donworth then ran in the Lexington Stakes (GIII), a late-April Keeneland race containing at least a few noteworthy 3-year-old horses just below the top level. The son of Tiznow did not embarrass himself, running a credible second to Divining Rod.

In Donworth’s next performance, the Sir Barton in May at Pimlico, the effort on paper appears less than stellar at first glance. This time, he never made a direct impact and finished third. The comments reveal though another troubled trip where Donworth was rank in the early stages (meaning he wanted to go and the jockey tugged back), and also raced wide on the far turn.

The following month, Donworth won by 11 lengths in an ungraded 50k stakes race at Delaware Park. He went on the bench for the rest of the year, which can be interpreted as either Donworth needing time to mature or a minor physical problem.

A recent article in the L.A. Times shows Donworth had a chip in his knee. The problem did not deter the connections from buying the horse, and in fact, Paul Reddam was willing to spend up to $800,000 to buy Donworth. When they received the colt for $550,000, Dennis O’Neil (Doug’s brother) called a happy Reddam to break the news.

“Well, you must have screwed up this one,” Reddam replied, as seen in the L.A. Times article. “Obviously, you missed something.”

With California Chrome gone in Dubai, the connections hope to take advantage of the older horse division in California. Saturday’s race looks like a great opportunity for Donworth to rebound in his second start off the bench.

None of his opponents truly stand out, as the exceptional Shared Belief did in last year’s edition.

Attention will be given to the Todd Pletcher-trained General a Rod, if only because Pletcher trains him. He did win a Gulfstream optional claiming race on the slop in January by over seven lengths.

Of course, the wonderfully-named Effinex will take money off his runner-up finish in the Breeders’ Cup Classic (GI) and win in the Clark Handicap (GI). Will he become overbet?

Also, late closers Imperative, Hard Aces and Class Leader are candidates for the win if the pace collapses.

The Santa Anita Handicap is wide open without a true superstar, which is the kind of race bettors prefer. Effinex seems likely to go off as the betting favorite, making Donworth a possible “value” choice in terms of odds and win probability. There is still time for Donworth to turn into a “monster” as well, especially with only five races under his belt. Time will tell the story.