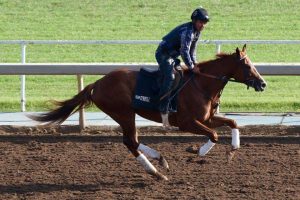 R Sunday Surprise’s owners Steve and Carolyn Coburn, who rose to prominence with California Chrome and his successful 2014 campaign, had a falling out with former partner Perry Martin and now operate under the Silver State Racing banner. Their official Facebook Page offers plenty of R Sunday Surprise pictures to check out.

Fans might also be surprised, although not unpleased, to know Doug O’Neill conditions the horse.

Now to figure out whether she can win.

“We haven’t seen her get tired yet in any of her works,” he said. “I don’t know if she’ll win first time out. She looks like a filly that, as the races go on and she gets experience, we’re going to have a lot of fun with.”

To be honest, 2-year-old races this early in the year are a guess for handicappers, especially in the Cal-bred restricted ranks. It is good practice though, as bettors will get ahead making sense of races others do not like.

The Lucky Pulpit/Love the Chase pairing was successful with California Chrome, who is on the path towards another Horse of the Year title. Love the Chase’s next foal, Hope’s Love, failed in five races at Golden Gate Fields.

At least, R Sunday Surprise’s worktab is beautiful from a spacing standpoint, with seven days between each work from May 9 to June 13. No major gap in the tab leading up to the race indicates a healthy horse.

Plus, the high-percentage Rafael Bejarano rides and O’Neill wins at a 14-percent clip with first time starters. R Sunday Surprise will not need a major performance to beat these fillies, but this article will go over each of them.

Toss out Secret Tattoo from the win spot, as her trainer shows an 0 for 17 record over the past year with horses making their career debut. Also, get rid of the Flower Alley-sired Ms Wakaya, who has worked as fast as a turtle.

Out of the experienced runners, You’re Late, Stormy Endeavour and Ocean Dream ran okay in their initial runs. Few handicappers will be surprised to see either of them win and horses making their second start are dangerous.

In contrast, Kimchee’s debut was awful, but again, inexperienced horses often improve overnight. It is difficult to assume Kimchee will duplicate her Beyer Speed Figure of 3 just because she ran a 3 at first. For what it is worth, trainer Gary Sherlock displays a $2.63 ROI with second-time starters, which is a profit on the angle.

Going back to R Sunday Surprise, the connections must feel somewhat confident about her talent as she only worked five times. Less confident trainers may train their horse forever before starting them.

On the other hand, this race can also serve as a “workout” for a more serious maiden-breaking attempt later on.

Despite the concerns, R Sunday Surprise offers enough positives, including a good family, successful connections and a leading jockey to guide her. If bettors must play this race, just key R Sunday Surprise and hope for the best.

Rebekah and Saber: An OTTB Story