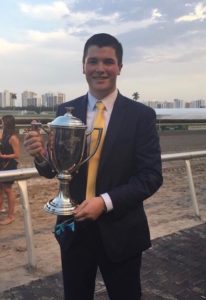 Expectations are always high when a horse is purchased for several hundred thousand dollars. However, those expectations don’t always come to fruition. For Matthew O’Connor, the 19-year-old nephew of Anthony Bonomo, a part-owner of Florida Derby (GI) winner and leading Kentucky Derby (GI) candidate Always Dreaming under the name of Brooklyn Boyz Stable, seeing the son of Bodemeister develop into what he is today has been what can only be described as the ride of a lifetime.

In the spring and summer of 2016 before entering his freshman year of college, O’Connor worked in the barn of Dominick Schettino, who at the time trained Bonomo’s horses and managed Always Dreaming’s early prep before the colt was sent to trainer Todd Pletcher. O’Connor happily recalls the day that year’s 2-year-olds arrived at Belmont Park and the day he first saw Always Dreaming.

“I immediately knew he was special, he just stood out from all the rest,” O’Connor said. “He was a physical specimen and possessed a commanding presence.”

Impressive observation, considering that among the 2-year-olds who arrived at Belmont last spring with Always Dreaming were stakes were stakes winner Toni Tools and stakes-placed Tellmeafookystory.

Right away, Always Dreaming displayed every good trait a horseman wants to see in a young horse, completing every task that was put in front of him with ease. O’Connor affectionately nicknamed the then unnamed colt ‘Lil Bode’ and just a week after arriving at Belmont, told his Uncle that he believed that without a doubt ‘Lil’ Bode’ was going to be a legitimate Kentucky Derby contender. 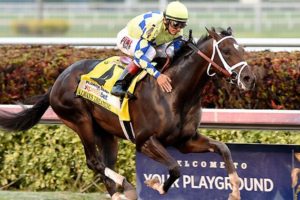 “(I said) this was the one he’d been waiting for, this is the one that is going to take us everywhere we want to go,” O’Connor remembered.

When the colt was given the name ‘Always Dreaming’ and his new halter nameplate came in, O’Connor popped off the old one — which read his pedigree line “Bodemeister-Above Perfection — and replaced it, putting the old one on his keychain, knowing how special he was.

“What made him so special to have worked around was his personality,” O’Connor said. “During his downtime he’s always goofing around and having fun, but when it’s time for business he puts his game face on and acts like a veteran.”

O’Connor recalled a special summer morning at Saratoga after the colt had completed his morning training.

“I remember having to wake him up from his post-training slumber to get him in ice boots, it wasn’t easy to do unless he heard the crinkle of a peppermint wrapper,” O’Connor remembered. “Once he was in them, he just stood there and played around, nibbling at my hat, tossing his head around, and raising his upper lip as if he was smiling. He just has so much fun with himself; (he’s) a real treat to have worked around. He showed his intelligence too, with all of that goofiness and personality, once you tie him up and throw the tack on his back it’s all business.”

O’Connor also recalled the mornings at Saratoga when he would walk the colt from his barn on the Oklahoma side to the main track.

“He would just look around as if he owned the place,” O’Conner explained. “As we crossed Union Avenue, he would just eye down the gap and puff up, go out there and do his business, then walk back to the barn on his toes. All I could think to myself was, ‘Wow, not even grade 1 winner Greenpointcrusader had shown that when I worked with him in 2015.’ I was always so high on him, but he shocked even me when he went out to work a half at Saratoga one August morning.”

That August morning, Always Dreaming worked a half-mile in a very impressive :46.93.

“He just did it so easy, and when he came back, it was as if he had just come out of his stall. It gave me chills.”

Fast forward eight months and Always Dreaming is now three-for-three this year, including his effortless win in the Florida Derby. Many people connected to runners are nervous on big race days, but O’Connor wasn’t as the colt headed into the Sunshine State’s signature Derby prep on April Fool’s Day.

“All of us were expecting a strong race from him, but I kept telling my uncle that he was going to run better than good. I just knew he was going to do something special, and he did,” O’Connor remembered. “I didn’t eat a single thing the entire day, but it wasn’t because of nerves. I was just so confident, and I wanted to get it out of the way so we could move on to Kentucky.”

And when Florida Derby post time came, it was total serenity for O’Connor. 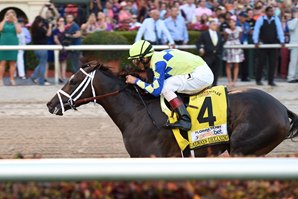 “I remember seeing him having to steady into that first turn when Johnny (jockey John Velazquez) had to hit the brakes for a second,” O’Connor explained. “The next thing I remember was just repeatedly yelling, ‘open up Johnny V,’ from the three-eighths pole to the sixteenth pole. When I saw Johnny looking around at the top of the stretch, I was very confident that we had it, and when Johnny shook him up a little at the eighth pole and he just started to move away with ease, I knew we had it locked up.”

The greatest pride for O’Connor, though, came in taking the moment in.

“I didn’t watch the last sixteenth of the race, but rather looked to my left and saw my uncle jumping up and down and saw my cousin Anthony Jr. leap into the arms of his friend and I just took it all in. That is what it is all about, moments like that are what horse racing is all about,” O’Connor shared. “I remember hugging my uncle and saying, ‘we are going to Kentucky,’ and immediately sprinted down to the winner’s circle.”

The manner in which Always Dreaming won was not even the most impressive thing about the Florida Derby for O’Connor.

“When I heard that he had run the fastest Florida Derby since Alydar I was in awe, I couldn’t help but think to myself, ‘is there an Affirmed this year?’” O’Connor recalled. “That night I remember laying in bed and was just reading through the names of horses that had won the Florida Derby; legends like Tim Tam, Northern Dancer, Forward Pass, Spectacular Bid. I was just amazed.”

When asked about the thought of winning the Kentucky Derby, O’Connor said he’d be overwhelmed with happiness for his uncle and the colt’s other partners.

“Of course (winning) would be an unbelievable experience,” O’Connor said. “Ultimately, I am just so happy for my aunt and uncle, Vinny and Teresa, Terry Finley and West Point Thoroughbreds, and Siena Farms. They have all put so much into this sport it is just great to see them have a horse of this caliber taking us all on the ride of a lifetime.”

Always Dreaming went to the Churchill Downs main track to train for the first time Wednesday morning after arriving from Florida on Tuesday. The colt galloped twice around the main track, but having not trained for two days, he was more than keen for most of his gallop and gave his exercise rider all she could handle, tossing his head and pulling hard in the early going. However, he got over the track exceptionally well and settled nicely in the later stages of the gallop. Trainer Todd Pletcher said Always Dreaming will go to the track twice more before having his final breeze for the Kentucky Derby on Saturday.

Do Speed Figures Matter in the Kentucky Derby?