Minorette Wins Major in Belmont Oaks Invitational: Minorette and jockey Joel Rosario took Belmont Park by storm on Saturday, July 5, 2014 in the G1 $1 million Belmont Oaks Invitational. The three-year-old filly entered the Belmont Park starting gate with 6-1 odds and finished the 1 1/4 mile turf race in 2:01.64 (see replay below) earning her an automatic entry in the Santa Anita starting gate for the Breeders’ Cup Filly & Mare Turf that is set to take place on Saturday, November 1, 2014.

Owners Michael Tabor, Mrs. John Magnier, and Derrick Smith sent Minorette to the United States for her 3-year-old campaign, which began with a closing third-place finish in a one-mile entry-level allowance in April at Keeneland. She had a single prep at Belmont Park, leading in the stretch of the 1 1/8-mile Wonder Again on May 25 before giving way late when runner-up to Sea Queen, who prevailed that day by a half-length. 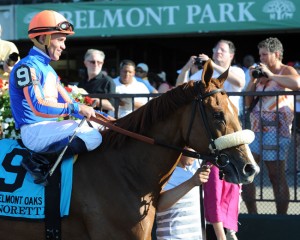 After Minorette’s 2014 Belmont Oaks Invitational victory, trainer Chad Brown stated, “Joel got to know her a bit. She was really training big coming into this race. We were pretty confident she’d give a good showing of herself in here. The more I got to train her, even before we first ran her, she just moved and looked like a mile-and-a-quarter horse. Her pedigree wouldn’t deter you from that, either. We just took our time with her. I tell you, the Coolmore group, wonderful organization to train for. They never told me where to run, when to run. ‘It’s a nice filly we’re giving you, and just give us some feedback.’ After the race at Keeneland at a mile when she was closing pretty good and got a good number out of the race, I immediately circled this big one and said, ‘Let’s just go for it.’ I gave her a local prep and it worked, because that’s what preps are for. She got a run over the course, and the jock got to know her. When the money counted today, he rode her perfect.”

Trainer Chad Brown was humble in his post-race interview generously mentioning his hard working team saying, “A big day, a wonderful day of racing they put on here. It’s exciting just to be part of it. I’m lucky to even have horses to be part of most of the program. To walk away with two winners, a great day for me and my team. I’m here doing the interview, but I’ll tell you I have a wonderful staff underneath me that’s working day in and day out. And without them, none of this is possible.”

Jockey Joel Rosario was happy with Minorette’s performance stating, “She moves like she wanted to go longer. Last time, I moved a little early to take the lead and she waited a little bit. This time I wanted to be a little closer because it looked like there wasn’t a lot of speed. I could see [Sea Queen] on the outside and wanted to keep an eye on her, and I didn’t want to move early. When she took the lead she just kept on going.”

Trainer Christophe Clement came in the money with Sea Queen and Summer Solo both crossing the finish line after Minorette. The 2014 Belmont Stakes winning trainer stated, “Both fillies ran very well; they were second- and third- best. It was fun to have a top class 1 ¼-mile race for 3-year-old fillies at this time of the year. They both ran a great race and nobody can take that away from them. We were expecting to be on the lead or close to the lead [with Sea Queen]; she’s a galloper, and that’s what she likes. Summer Solo ran great. I knew she was going to run a good race; she’s trained so well. She’s a very nice New York-bred.”

Fans will surely keep a close eye on Minorette as she works works her way to the 2014 Breeders’ Cup Filly & Mare Turf.