Home » News » Stallion Feature; Lemon Drop Kid is No Lemon of a Stallion
No Comments

Stallion Feature; Lemon Drop Kid is No Lemon of a Stallion: Let’s go back for a moment, to the wonderful year of 1999 and the early livelihood of the Triple Crown races. Does anyone know who won the 1999 Triple Crown races? I do! I may have only been five-years-old in 1999 (showing my youngness) but I can name the winners of 1999! The unlikely colt named Charismatic won the Kentucky Derby and Preakness. He would face fresh horses in the Belmont. One of the fresh horses would dethrone the Charismatic king. That colt was long-winded Lemon Drop Kid, and that colt is whom I will be talking about today. 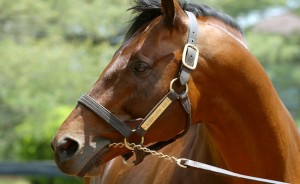 Lemon Drop Kid is no longer that three-year-old colt that played spoiler so long ago. Now 18, Lemon Drop Kid can be found standing stud at Lane’s End Farm in Kentucky. The stallion is a moderately priced stallion, which stands for $35,000. For this price, Lemon Drop Kid is the cheapest stallion I features in this weekly publication.

For the $35,000 that’s required to breed a mare to Lemon Drop Kid has proven to be quite a steal! From Grade One winners like Lemons Forever (Kentucky Oaks), Somali Lemonade (TVG Diana), and Richard’s Kid (Pacific Classic x2), to Grade Two and Three winners like Kid Cruz (Dwyer) and Aurelia’s Belle (Arlington Oaks), Lemon Drop Kid has offspring racing and winning on every surface!

Why can his offspring be so versatile? One indication is the pedigree Lemon Drop Kid passes on. Another is that Lemon Drop Kid won anywhere from 6F to 12F (Remember, he did win the Belmont Stakes). His offspring have helped Lemon Drop Kid move to #6 on the general sires list, with their 2014 earnings of over $6 million dollars. In 2014, his runners are winning at a 50% clip. He boasts a 102 winners record from 203 runners. To date, Lemon Drop Kid has 79 stakes winners and 34 graded stakes winners to his credit.

Now, after discussing his runners, let’s discuss Lemon Drop Kid as a racehorse. At 2, Lemon Drop Kid won a grade one event called the Futurity Stakes, over a prominent sire today, Yes It’s True. Lemon Drop Kid also finished second in the 1 mile Champagne Stakes, which is also a grade one event. At three, Lemon Drop Kid started to come into his own a bit later in the season. He hit the board with a third in the Peter Pan (G2) and a second in the Jim Dandy (G2), but his big wins came in the Belmont Stakes (G1) and the Travers Stakes (G1). Here, he beat the likes of Charismatic, Stephen Got Even, Silverbulletday, Menifee, and Cat Thief. Some of the best horses of his generation couldn’t beat Lemon Drop Kid at his best, but they had yet to see the best of him.

At age 4, Lemon Drop Kid took off, stringing together wins in the Woodward (G1), Whitney (G1), Suburban (G2), and the Brooklyn (G2). He also hit the board, finishing third, in the Pimlico Special. Lemon Drop Kid had become to best older horse in the country at age four, and that string of wins earned him the 2000 Eclipse Award for Older Male Horse.

When Lemon Drop Kid retired, he had left the track with a 24-10(7)-3-3 record and earnings that surpassed $3 million dollars. He went on to become a very desirable stallion for those who sought out durable, sound, and long-winded horses. He will continue to likely climb the charts as he gets better and better mares sent his way.

Wise Dan; Somewhat of an Oddity in Horse Racing