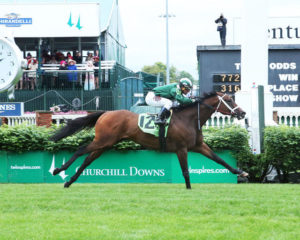 LOUISVILLE, Ky. (Friday, May 5, 2017) – Abdullah Saeed Almaddah’s Green Mask collared pace-setting Latent Revenge inside the sixteenth pole and drew off to a two-length victory in the 14th running of the $150,000 Twin Spires Turf Sprint presented by TwinSpires.com (GIII).

Trained by Brad Cox and ridden by Javier Castellano, Green Mask covered the five furlongs on a “good” course in :58.02.

Longshot Latent Revenge opened a daylight margin in the sprint down the backside while Castellano had Green Mask stalking in fourth place and running in the clear on the outside. Turning for home, Latent Revenge maintained a comfortable margin until Green Mask kicked in and swooped past for the victory.

It was another 1 ¾ lengths back to favored Pure Sensation, who was followed in order by Wilbo, Holding Gold, Partly Mocha, Derek’s Smile, Expected Ruler and Tell All You Know.

Javier Castellano (rider of Green Mask, winner) – “I was outside the whole way. He handled the turf really well. He was nice and smooth, put me in a good spot. I never rode the horse before, I just followed the instructions very carefully. He (trainer Brad Cox) told me he was the kind of horse where you have to wait until the last moment and about the eighth pole I saw the horse in the lead and I thought, man, I’m riding too patient, I have to go. But I timed it right.”

Brad Cox (trainer of Green Mask, winner) – “Javier (Castellano) did exactly what he was supposed to do – sitting on the outside and let the speed get away. He let him settle in mid-pack sitting off the pacesetters, which was probably a good thing being on the outside today with the turf draining down to the inside. This is the first time we’ve run him at five-eighths of a mile. It didn’t seem to bother him at all. He took to it. The horse responded with a big effort. “Next time? Maybe in New York or maybe we’ll look to the West Coast as well. He’s without a doubt a one-turn sprinter on turf and that’s where we’ll keep him.”

Rafael Bejarano (rider of Latent Revenge, runner-up) – “I had a lot of horse. I looked behind and no one was coming yet, so I tried to open up in the stretch, but (Green Mask) was flying at the end.”

Greg Foley (trainer of Latent Revenge, runner-up) – “We were a little worried about (Tell All You Know), because he went in 20 and change at Keeneland and that was just suicide and killed us. I just told Rafael (Bejarano) to sit back if that happened, but he got a lead and didn’t go too fast. He ran a big race. (Green Mask) beat us in the (Bonapaw Stakes at Fair Grounds) the same way.”

Flavien Prat (rider of Why Two, third-place finisher) – “I got a good trip. He ran a good race coming back (from a layoff). He should improve off this race.”

Mike Machowsky (trainer of Why Two, third-place finisher) – “He ran great. We’re happy. We’d have rather been on firm going like he’s used to but now we know he handles this a little bit. There are so many options for him. There’s a race back at Santa Anita but there’s also a possibility of Royal Ascot. There’s a race at Belmont, there’s a ‘Win And You’re In’ at Woodbine in July. My main goal is to get him to Breeders’ Cup at Del Mar where he likes that turf.”